For the Emperor! Cleanse, Purge, Kill!

Warhammer 40,000: Space Wolf - the seventeen millionth iOS game with the Warhammer license - is a clever mix of turn-based tactics and collectable card battling.

The fights take place on a grid, and play out like a mission in XCOM. But your potential moves and abilities are dictated by the cards in your hand. So building a good deck is as important as building a good squad.

Juggling the two mechanics can get tricky. So we asked HeroCraft to give us a few tips to get us started. Add yours in the comments below.

You can move using almost any card in your hand - You don't need to wait for Move card, since any card (except for ‘Effort – X’) can be used to move your soldier during the battle.

You just need to select it and press the ‘boot’ icon. You can also turn 90/180 degrees by selecting the movement action and then double tapping your current position.

Plan your effort and manage turn order - Effort is the key concept to understand and manage the turn order of your soldiers and the enemies. Each time the character performs any action the respective amount of effort (specified on upper right corner of the card) is added to his current effort.

After the character finishes his turn the next character with the lowest effort is activated (including all enemies, the members of your squad, wolf and other companions and allies). Wisely planning of your actions and using ‘Effort – X’ cards can allow you to perform a few turns continuously by the same soldier without interruption by enemy actions.

Defence is vital for your survival - Use defensive shields as soon as you receive them. But remember that the maximum armor level is three and can’t be exceeded regardless how many cards you applied. Usually using shields requires large amount of effort (10+), but it can be reduced significantly by upgrading shield cards.

End turns with unspent action points when necessary – As said above, controlling the turn order by managing everyone's effort stats is vitally important.

One of the widely used tactics is to end your current turn after your first action, if your effort is lower than your enemy effort. This will allow you to make second turn before your enemy. This tactics is also very useful after throwing a grenade to ensure that it will explode before enemies move away.

Know each weapon's firing range and plan your movement respectively - Most of your ranged weapons can hit only single target and have a firing range that's four squares long and three squares wide. But there are exceptions that are worth remembering.

Use your sniper rifles to hit enemies from safe distance - Since most enemies have weapon with a four square firing range, put your sniper at five squares distance from them. You can also protect sniper putting heavy soldier with armour before him.

Select the location that allows you to hit enemy soldier, but do not allows enemy to hit your without additional movement or turning - Move your soldier to the left or right side of the enemy rather than in front of him, so the enemy soldier will need to spend one of his actions on turning in order to hit you. 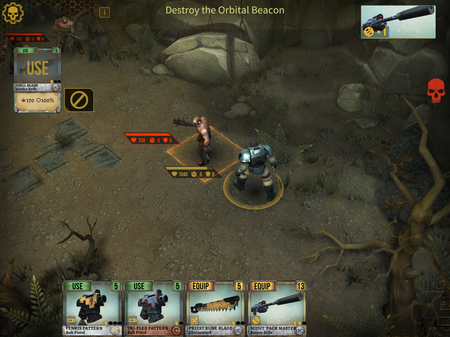 Use Overwatch weapon to receive an additional free shot – If the enemy finishes his movement in the firing range of your soldier with an equipped overwatch weapon, you have the chance to automatically shoot him. This shot spends your ammo, but it doesn’t spend any action or effort.

Use your Fenrissian wolf to divert enemies’ attention - You will receive wolf companion card when you unlock Scout armor class. This card requires a lot of effort, but gives you a companion that not only diverts the attention of all surrounding enemies, but can also easily kill them with a bite. Wolf can be extremely useful during first and second campaigns.

Avoid having too much effort at a time – Usually it is not a good idea to get your effort level to more than 20 (achieved by using high-effort cards or performing more than two actions during one turn) when you are in the battle and enemies are close.

It can easily freeze you for two or even tree enemy turns and result in being shot.

Use Rage efficiently – Your Rage bar fills when you receive damage. There are specific armor class perks upgrades that allows to fill it more often (for example, when your squad members receive damage). When your Rage bar is full your effort amount is zeroed and your next attack has 100 percent accuracy and can be boosted by fast screen tapping. 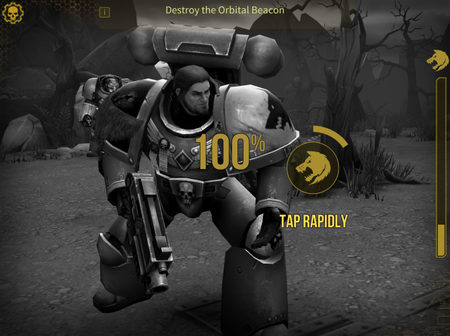 It means that when you expect that Rage bar will be filled during next enemy attack, you may obtain any amount of effort, since all this effort will be zeroed.

Scout and Terminator armor classes give you 30 more cards to play - Unlocking Scout and Terminator classes is quite expensive, but it not only provides you with new classes that can use their own unique weapon, it also adds new squad members and new cards that are not class specific and can be used by Power armor (like Wolf companion, Sprint, Ambush, Shields).

There are different ways to acquire new cards, and some of them do not require credits - You can acquire new cards by buying boosters, forging them, earning them in missions (you get one card for each fulfilled mission objective), and unlocking new armor classes (30 cards for each class).

You can significantly increase your chances to forge better cards by selecting higher craft difficulty - However, remember that higher difficulty also requires more weapon parts (from 100 on simple to 250 on extreme) and lower chances for success. Iron runes gives you 100 percent success chance, so use them together with Extreme craft difficulty.

Upgrade cards to improve their characteristics - If you have two or more equal cards you can combine them into one card with better characteristics (such as less effort, more damage, or more accuracy).

Later on when you will have more rare and epic cards with superior characteristics it will be more efficient to dismantle common and uncommon cards, rather than upgrade them (whenupgrading cards, you cut in half the amount of weapon parts that you can receive from their dismantling).

Dismantle the cards that you don’t need any more - Dismantling the inferior cards not only makes your deck smaller and easier to manage, but it will also give you working parts that can be used to forge new cards.

All soldiers have different specialisation, so you can select the ones that match you playing style. Improvement and upgrading of squad members is expensive (starting from 800 credits for level two to 5600 credits for level eight upgrade), but it will:

The squad members are:

Einar (Tactical Marine) has a little bit of everything plus jump packs, which are really useful for getting behind enemies and getting to hard to reach objectives (forge crates).

Kai (Flamer) has good area of effect damage by Flamers and armor breaking Meltas with the occasional shotgun for single target punch.

Ray (Devastator) has access to some unique heavy weapons that are quite powerful, like the powerful area of effect damage Rocket launcher and range six (but only in a straight line) armor-ignoring Lascannon. You can also unlock Heavy Bolters, which are strong overwatch weapons.

Harald (Terminator) has more HP than the other squadmates and gets Shields, making him much more like a tank. He also gets Stormbolters which do great ranged damage and several powerful melee weapons. If you invest enough into him, he can also get Heavy Flamers for some sweet area of effect damage and a few teleport cards, which are effectively the same as jump packs.

Yngvar (Scout) gets a pack of range-five Sniper rifles and a few Sprint cards, but has less health than other squadmates. He makes for some good tactical long range play, but do not leave him alone in front of enemies.
SEE COMMENTS

Warhammer 40,000: Space Wolf is getting a terrifying new foe in an update next week