Apple has joined up with the charity (RED) and a whole bunch of iOS developers to launch the Apps for (RED) campaign, an initiative to raise money to fight AIDS.

The big news is that Monument Valley has been updated with a new level, which will apparently end the story of the game. It's available for 69p / 99c. It's called Ida's (RED) Dream, and 100% of the purchase price goes to the charity.

Clash of Clans has introduced a new Pile of Gems (RED) IAP, and Rayman Fiesta Run has added a bunch of new costumes. All of the money you spend on them will go to (RED).

Threes! Will donate all of its purchase price to the charity until December 7th, Angry Birds has a couple of new (RED) themed things to buy, and Puzzle & Dragons does as well. 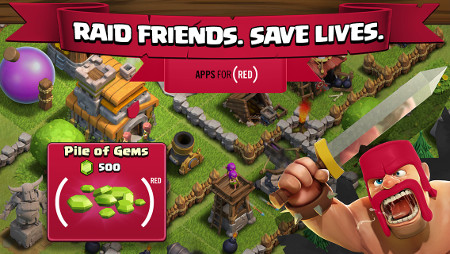 FIFA 15 Ultimate Team also has a new (RED) IAP, as well as a tournament challenge that lets you compete to unlock Rafa Márquez.

There are none-game apps involved as well, so it's worth heading over to the App Store to see what's what and how you can make a difference. If you don't like buying things, there's a donate button on the Store as well.

The various promotions will run from today until December 7th, but there's more going on as well. This Friday, November 28th, US iTunes shoppers will receive a special (RED) gift card with certain purchases.

And on December 1st, World Aids Day, a portion of every sale at Apple's retail and online stores will be donated to (RED).