Android-powered gaming devices are pretty common these days, and we've seen some good - and not so good - examples of how Google's OS can be harnessed to create rivals to traditional portable systems.

Leading the pack right now is the Nvidia Shield: a device which combines a dedicated gaming interface with powerful hardware.

However, even this year-old device might prove to be too expensive for many consumers, so thank goodness for the seemingly unstoppable legions of Chinese companies which seek to produce similar portables for more reasonable prices.

One of these firms is JXD, which has already pushed several Android-based challengers onto the market. The latest effort is the S7800B "GamePad 3", an enhanced version of last year's S7800.

Can this tablet and console hybrid really provide a satisfactory gaming experience for just £130, or are you better off investing a little more cash and looking elsewhere? 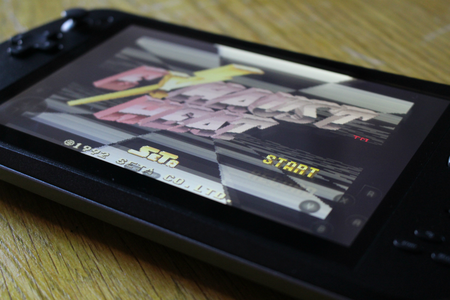 As you'd expect from a device which is built around a 7-inch screen, the S7800B is somewhat large. It's essentially a tablet with physical controls at either end of the display, and in order to accommodate these additional elements JXD has produced a system which is a little longer than most traditional slates. The rounded ends make it easier to hold, and the rear of the device has small bulges which also increase grip.

The downside of these is that when laid down on a flat surface, the S7800B doesn't stay still - it wobbles all over the place.

In terms of gaming controls, the S7800B is festooned with buttons and sticks. There are two anloague nubs which look like the ones seen on the PS Vita - but don't feel quite as nice - and there's a single 8-way digital pad. Four face buttons are also included, as well as four shoulder buttons - two on each corner. There are keys to cover the usual Android options such as Home, Back and Menu, but these are joined by Start and Select buttons.

The S7800B has an entirely plastic case design, and while it feels solid enough, there's a slight whiff of cheapness about it. The buttons are also decent enough, but don't have the same pleasing tactical response as those found on consoles such as the Nintendo 3DS or Vita. The main thing for retro gamers is that the D-pad is excellent. 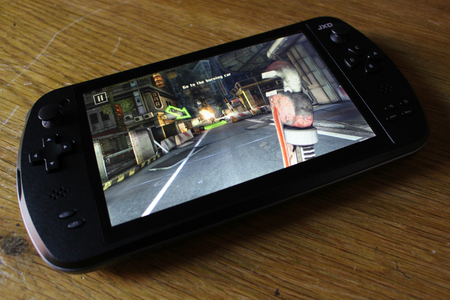 Gaming is clearly the focus of the S7800B, and the device even comes pre-loaded with several emulators and an app which gives easy access to thousands of ROM files - the latter of which is legally questionable. Still, emulation on Android is pretty rampant right now, with plenty of options on offer for serious retro gamers.

The good news here is that in terms of performance, the S7800B is more than capable of playing classic games from older systems; even N64, PlayStation, and Dreamcast support is possible, although those machines aren't emulated to quite the same standard as their older relations.

It's in this regard that the S7800B really comes into its own; the physical controls mean you can experience an almost perfect interface for these vintage classics. The large IPS screen is bright and colorful too, offering the ideal platform for your whimsical trips down memory lane.

The only sour note is that many emulators don't want to play nicely with the console's physical interface; some will automatically detect the presence of the physical pad and buttons, but others refuse to acknowledge certain button presses, making it almost impossible to map the controls completely.

For more traditional Android titles, the story is very much the same. The S7800B has the power to run complex 3D games to an acceptable degree, but its controls aren't always recognised. Thankfully JXD has included a piece of software which allows you to map the buttons and sticks to on-screen controls, meaning that with enough patience any Android game - in theory - can be played on the machine. 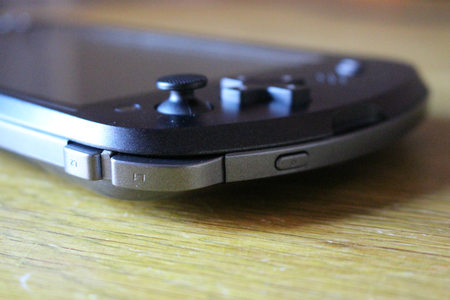 Game consoles live or die by the quality of their controls, and thankfully the S7800B manages to provide an agreeable experience. The buttons are responsive and comfortable to use, and while the twin analogue sticks aren't up to the standard seen on other systems, they're good enough for the job.

8GB of storage is included on the model we reviewed, but there are larger capacities available. Even so, there's a MicroSD card slot which allows you to supplement the internal memory cheaply and easily. This means you can effectively carry around the complete libraries for many of the retro consoles emulated by the S7800B; this alone will give serious gamers cause to reach for their wallets.

And when they do, the incredibly modest price point of £130 is sure to make the purchase even smoother.

Aside from it's gaming focus, the S7800B benefits from its Android heritage. It's running a reasonably stock version of 4.2.2, with the most noticeable difference being the Samsung-style coloured icons, which make the interface look friendly and less stark than "vanilla" Android. You can use it as a normal tablet, although the awkward shape makes it hard to use in portrait mode. 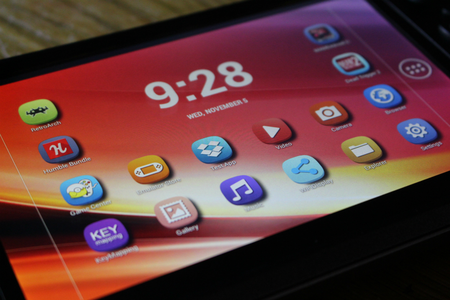 While pretty much every tablet maker has now shifted to USB power for battery top-ups, the S7800S will only charge when using the bundled wall charger - a truly idiotic oversight which means you'll have to carry around an additional PSU whenever you leave the house with the system.

Despite a robust 5000mAh power cell, the S7800S can only muster around 4 to 5 hours of play time, so you'd better not lose that charger or the system becomes practically useless.

Another issue we noticed is that the touchscreen often fails to respond to inputs. This seemed to be particularly bad at the bottom edge of the screen, with several disgruntled taps required to actually select something. 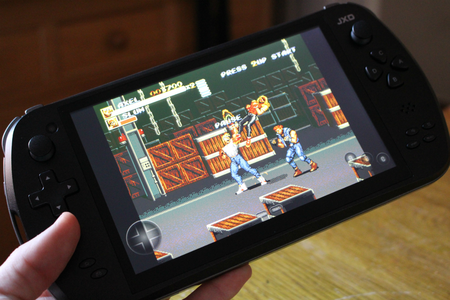 For retro players, the S7800B is likely to present a very attractive purchase. It runs pretty much every classic system from the past few decades and offers excellent control options as well. Add to this a decent screen, expandable storage and a low price point, and you've got an eminently viable alternative to the likes of the Nintendo 3DS and PS Vita.

However, there are shortcomings which should be noted before handing over your cash. Battery life is a disappointment and overall performance is sketchy, with the touch screen sometimes failing to register commands and the underlying hardware struggling occasionally. The S7800B certainly doesn't offer the silky-smooth experience you'll find on a traditional Android slate like the Nexus 7. We also can't fathom why the device doesn't have support for USB charging.

Despite its failings, the S7800B performs its primary role well enough - and that's to play old games on the go. Promotional material for the system focuses heavily on emulation, and while it's not quite up to the standard seen on the more powerful - and more expensive - Nvidia Shield, it will be more than enough to satisfy the needs of most ardent retro enthusiasts.

Thanks to www.FunStock.co.uk for supplying the unit used in this review.

Touchscreen and performance issues aside, the S7800B is a retro-gamer's dream come true, with excellent controls and a vibrant screen
By Damien McFerran
| Nov 12, 2014 |
Android
SEE COMMENTS

Agent, Run! is a pretty spry endless runner with a twist that's out right now for iOS and Android