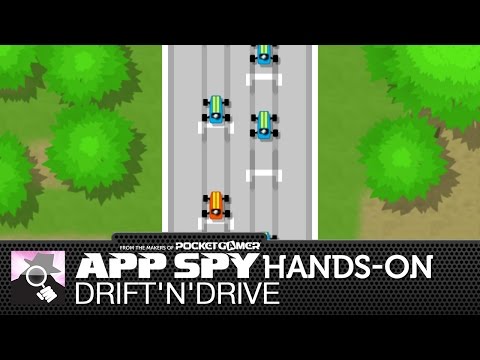 It's amazing that Drift'n'Drive isn't free to play, because its steady rhythm of upgrades and currency-collecting rounds of drifty pixel-art-clad gameplay seems like a natural environment for IAPs, whales, and other modern phenomena of that kind.

But no. It's an IAP-free game that costs £1.49 / $1.99 and tasks you with competing in races that you have no chance of winning until you've earned enough money to buy the necessary boosts and upgrades.

The key to Drift'n'Drive's success is that you never quite know when you've bought enough upgrades to cross the threshold that makes victory possible, so every race is an urgently contested affair despite the fact that the real driver of progress is grinding.

Woah Dave! bears a passing resemblance to Super Crate Box thanks to its basic single screen platformer stages. But it's both simpler and more difficult than Vlambeer's game.

You have to survive for as long as you can by dodging and killing monsters that emerge from eggs. You kill them either by throwing an egg at them or throwing a skull at them, which destroys both monsters and eggs.

After a few seconds, eggs hatch and skulls explode, both of which events are fatal if they happen too close to you. Rounds of Woah Dave! tend not to last very long.

This is quite a basic and derivative twitch platformer, but it's well-made enough to deserve a following among fans of games like Super Crate Box and Super Hexagon.

Despite its slightly creepy-sounding title, Twisty Hollow is a decidedly un-creepy take on the time-management genre that sees you spinning three concentric discs to bring matching items together.

As with all time-management games, everything soon descends into frantic tapping as you struggle to keep up with demand. It's not a new concept, but it's innately well-suited to touchscreens, and the revolving mechanic adds a welcome new ingredient.