Defend or destroy the galaxy in Star Wars: Galactic Defense, out now on iOS and Android

It's a pretty typical TD game where you deploy and upgrade a corridor of turrets to fend off waves of incoming baddies. Only, this time, the baddies are Stormtroopers and, I dunno, Jawas? Is that a thing?

Much like in Clash of Clans-alike Star Wars: Commander, you'll get to choose your allegiance and decide whether to fight for the light side or the dark side.

That will affect gameplay, and will decide which Star Wars champions you can deploy. Rebels get heroes like Luke Skywalker and Han Solo, while dark side players get villains like Darths Vader and Maul. 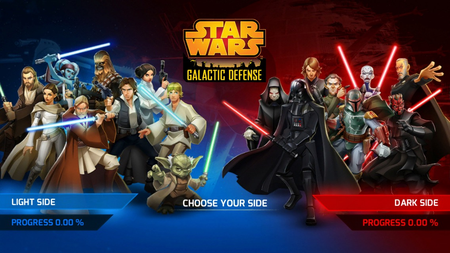 The game's got loads of levels, powers, and turret types, and it represents both the classic and prequel eras which I believe are more commonly referred to as the 'good' and 'utter bum' eras.

If this sounds like it might be up your alley, you can get Star Wars: Galactic Defense on iOS here, and Android here.

Star Wars: Galactic Defense for iOS and Android isn't too far, far away