Caverns of the Snow Witch, another Fighting Fantasy adaptation from Tin Man Games, is out now on Android

Which witch will you pick? 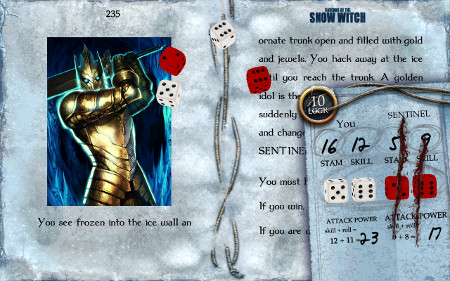 Tin Man Games is following its usual release strategy by sneaking Caverns of the Snow Witch onto the Google Play Store a couple of weeks ahead of its release everywhere else.

The game is another Fighting Fantasy adaptation from the heyday of the physical gamebook. It was written by Ian Livingstone, and sees you traversing an icy waste to stop an evil Snow Witch from doing awful things.

This one looks like a more traditional digital version than Tin Man's previous Fighting Fantasy release Appointment with F.E.A.R., but you can expect the usual level of polish and digital dice-rolling all the same.

We'll let you know when it's released on iOS as well, because we're good like that.

Card Dungeon, Play Tap's clever mix of a roguelike and a card game, is out right now for Android

Caverns of the Snow Witch

Out at midnight: Caverns of the Snow Witch is Fighting Fantasy's seventh digital gamebook