Time to get off the convoy of failure

Galaxy Trucker is a fantastic digital board game.

It looks and sounds the part, and has a variety of excellent single and multi-player modes. It's the benchmark by which future adaptations should be judged, and I urge you all to play it.

But with its mad scrambling for tiles, random asteroid showers, and other unexpected events, it might seem light on strategy. That's a bit of a black mark for a lot of board game fans.

Luckily, it's an impression quickly dispelled when you get into the meat of the game. Playing online with your friends, you'll soon see clear leaders emerging. And once you're a few missions into the campaign, those easy flights become a lot more challenging.

So if you want to get to the other end of the galaxy intact, and make a fat pile of credits on the way, be sure to pack a copy of our strategy guide before you leave.

The first thing you need to do is build a ship. This is a contest of the application of skill at speed, under pressure. In the final reckoning, there's no substitute for practice.

There are, however, several things you can do to help you learn the right skills as fast as possible.

Train your brain to discard its assumptions about what's best and what isn't. Bright coloured alien cabins and laser canons look cool, but they might be no help in the race at all. 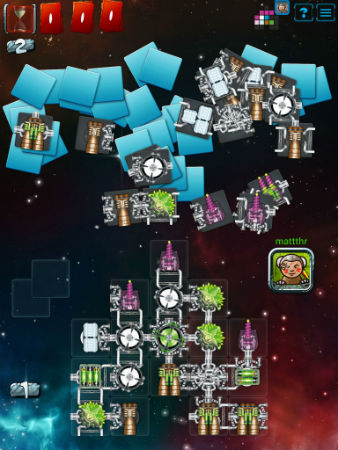 Same goes for double engines and double canons. They're most enticing when you pick them up, but useless without a supply of batteries. And don't forget the canons work better pointing forward.

Aside from the actual component itself, take note of the connectors. In the desperate rush of ship assembly against the clock, it's easy to close off a whole section of your ship blueprint by accident. That's some poor schmuck out of the race before it's even started.

Don't be that schmuck. Watch the connectors.

Some tiles are worth their weight in gold. Anything that's functional and has a mix of connectors is worth owning. There's also a limited supply of three-value batteries and cargo holds, and two-value radioactive bays. If you're lucky enough to grab anything like this, get it in your ship, or into storage until you can.

Always have at least one engine. After you've played a couple of games they can seem tempting to skimp on, since few encounter cards are engine dependent. But if you hit open space without an engine, it's game over, instantly.

How you go about building your ship depends partly on the size. Lasers and engines have to be external. So a bigger structure means more space for internal components like cabins and cargo holds. 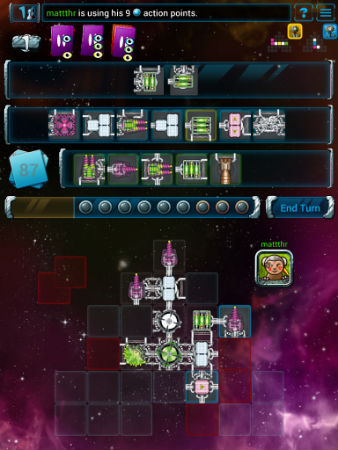 When you're building to a larger blueprint, consider adding aliens. In small ships they're a waste of space because each needs a cabin and a survival module. But for bigger craft they make your design much more flexible. And you'll need their engine and laser bonus to overcome the tougher encounter cards in big-ship races.

Lasers are more important than engines. As long as you've got at least one, lacking in engines just means losing race position. Lacking lasers can mean the total destruction of your ship by pirates or meteors.

With this in mind, build forward first so you've got the space ready for your forward pointing laser canons.

That's the basics covered. With those mastered you should be able to build a structurally sound ship.

To build a winning ship, though, you need some idea of what components to put in it. To do that, you have to sneak-peek the encounter cards for the race.

When you start out, it's easy to overlook the cards. There you are, an aching, empty blueprint at the bottom of the screen and a tempting pile of face down component tiles at the top. The race is on, and those tiles are occupying every ounce of your attention.

Those cards, which you can view by tapping on the icons at the top left, make the difference between amateur players and pros. Grab a look as soon as you can, and memorise what they are. They don't have all the encounters for the upcoming adventure, but any information is worth its weight in space dust. 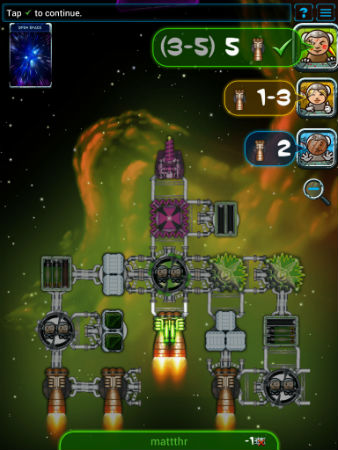 Once you've got a handle on what's coming, you can build your ship accordingly. If there's pirates or slavers, be sure to arm enough canon to see them off. If there are planets, find space for some cargo holds. If there's cosmic dust, be careful leaving too many exposed connectors.

This is true even for the campaign game, where particular missions often draw from a limited card pool. If you're trying to get all the crew to the other end alive, knowing if there's epidemic cards in the mix can save you from instant failure.

Scores on the doors

One-stage races are easy to score. But once you're in to two and three stage races, it pays to understand the different score elements to maximise your points.

The score on offer for finishing first increases at each stage. So a good third stage can easily compensate for bad races in the first two parts.

That said, the leader gets the first choice when event cards come up. Sometimes, with events like Abandoned Ship where only one player can take advantage, they might get the only choice. 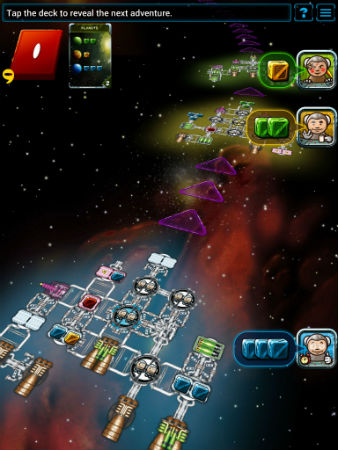 This is important because while coming first nets you a lot of credits, the deal-breaker is often the resources snaffled during the race. It's important to have cargo holds, to stay high in race position to get a good pick of cargo, and to have enough canons to see off smugglers.

These two elements are by far the highest priority. Other rewards, like component damage or the best looking ship, are nothing in comparison. Place highly and grab plenty of in-race cargo and credits and you'll win most of the time.

It's easier said than done of course. Practice makes perfect. So get flipping those tiles, and welding those pipes!