Eyes-on with the Monument Valley follow-up

The final hurdle for virtual reality gaming, according to Ustwo designer Peter Pashley, is figuring out the controls.

Most games ask players to wrangle a traditional controller - and you can't even look down and see the buttons and sticks while you play. That makes VR a tough sell to anyone who hasn't been fiddling with Xbox pads for a few years.

So with Land's End - the debut VR game from the studio that brought us Monument Valley - it was essential to ditch the controller to make a game that anyone could play. It doesn't even use the touch panel on the side of the Galaxy VR headset.

Instead, you navigate and interact with this serene seaside landscape just by looking.

There are nodes dotted around the environment, and you can elegantly fly to one just by fixing your gaze upon one for a couple seconds. Similarly you can activate switches just by looking at them, which makes you feel like you have super powers.

It's designed to be played on a swivel chair so you have full 360 degree movement. But there are some clever functions in place so you can look behind yourself when on the sofa. 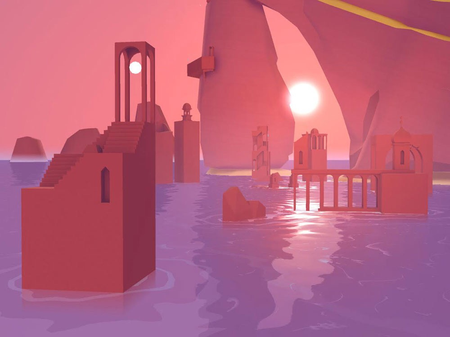 Land's End is inspired by awe-inspiring landscapes and monuments like mysterious burial mounds and Stone Henge.

That works wonderfully in virtual reality, which really reveals the sheer size and scale of digital worlds in ways that a flat screen simply cannot.

The cliffs I explored in this Land's End demo felt like behemoths stretching out the ocean, and there's a brief sense of vertigo when you climb to the top of the structure and peer back down to the sea.

Pashley says his team is exploring ways to play with virtual reality to make for interesting - and even slightly uncomfortable experiences like spelunking in tight, claustrophobic caves.

The puzzles, when they're added, will apparently encourage you to look at and analyse the environment.

Pressing switches will make mountains move, land bridges appear, and towers sink into the ocean. You might have to toggle switches in a specific order to find the right path - all while marvelling at the these landscapes.

For Ustwo, the challenge is making the environments in Land's End feel like real places rather than video game levels. "We never want to remind the player that they're in the game, or take them out of the experience," says Pashley.

In VR especially, any hint of 'gamey-ness' can shatter the illusion in an instant.

One way in which this is achieved is by making animals in the game - like seagulls by the cliff, and a giant whale that swims by in a later level - move randomly, because a canned animation loop would give them away as game objects. 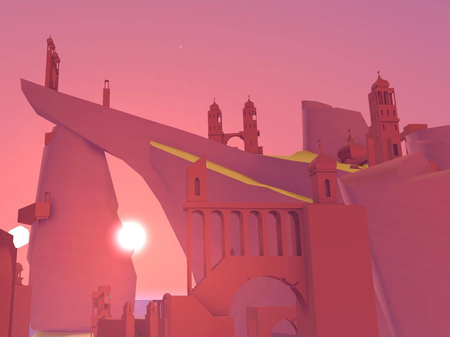 In its daring colour palettes, chunky design, and, later, impossible architecture, Land's End looks a little like Monument Valley. Pashley describes it as a "spiritual cousin" to the studio's previous game.

And another similarity will be the game's story, which will be an understated narrative - shown, not told. Going beyond Monument Valley, Land's End will likely tell its tale without a single word on screen.

Instead, you'll find out about the environment and it's history just studying your surroundings like a digital archeologist.

Ultimately, Land's End is everything you would expect from the first VR game by the folk who made Monument Valley. It's beautiful, curious, wonderfully original, and playable by anyone.

If it becomes a launch game for the Galaxy VR - Ustwo's current plan - it will be an essential first experience for the new headset.