If you track livetweets or other social media during game events, you may recall the excitement generated during Sony's E3 press conference over Shawn Layden's shout-out to Vib Ribbon.

Some interpreted this namedrop as a hint towards a possible re-release of the classic PSX rhythm game.

Sadness and disappointment permeated the niche corners of the Sony fanbase when that announcement never came.

Yet according to Layden, President and CEO of SCEA, your voices weren't unheard. Vib Ribbon is making a comeback after all.

Vib Ribbon hits PlayStation 3 and PS Vita, tomorrow in North America, Latin America, and Japan, with a European release in tow for next week. A price has not yet been announced.

For the unfamiliar, Vib Ribbon is a trippy, vector art music game from 1999 that saw more love as a cult hit rather than a mainstream success.

An official release never even made it to North American markets.

Vib Ribbon's designer, Masaya Matsuura, is perhaps most well known for his work on PaRappa the Rapper and UmJammer Lammy. 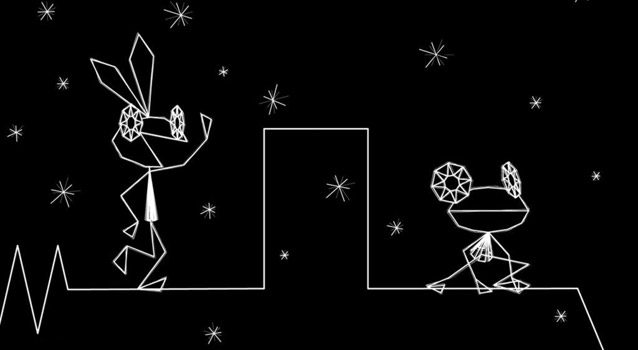 These earlier rhythm games for the PSX saw more widespread popularity than the sketchy, black and white line art and the song-induced shape-shifting rabbit of Vib Ribbon.

Despite Vib Ribbon's lack of financial success, though, Layden believes it "really captured the crazy that PlayStation was keen to offer" in its earliest days, something Sony is "continu[ing] now with [their] outreach to the innovative and indie game community."

According to Layden, "Sometimes games like Vib Ribbon require backing and belief that do not comport with the marketing wisdom of the day, or the forecasted financial upside. Sometimes you get behind a project because, well, you gotta believe."

You can read more about Vib Ribbon's early history, and why Sony has decided to revive it, in Layden's blog post here.