Ubisoft's The Bot Squad: Puzzle Battles is a F2P hybrid of robotic defense and puzzle games

Ubisoft has announced a new game and, surprisingly, it's not yet another entry in its Assassin's Creed series.

Instead, it's a free to play hybrid of tower defence and puzzle games called The Bot Squad: Puzzle Battles.

It has you controlling a team of bots searching for an orb of energy across the trap-filled arenas of Dynamo City.

Its 180 stages (across four strategic puzzle modes) are played on tile-based free-floating arenas that you help your squad to navigate.

While moving forward, you also need to defend your own orbs from waves of hostile robots using blockers and attack bots.

So it's a game of push and pull, of attack and defence - I hope you can multi-task. 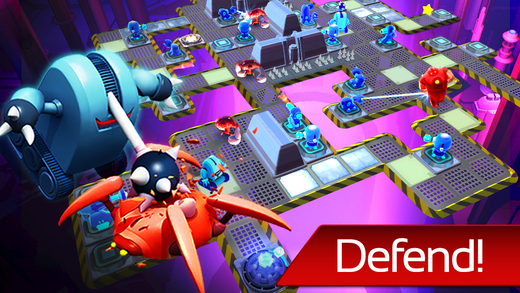 When playing it, you'll want to unlock and upgrade new bots as you progress to keep up with the challenges. Team management, then.

It will be released worldwide for iOS and Android on October 16th. And yes, the game will be supported with additional content after that date.

There's more information about The Bot Squad: Puzzle Battles on its website.

The Bot Squad: Puzzle Battles is a reasonably interesting mix of genres that's out right now on iPad and iPhone