Hands-on with Marvel Contest of Champions, the comic-battling beat-'em-up

Out now in Denmark

Wolverine is punching Iron Man in the face. Adamantium slashes, repulsors are fired. It's a big super hero comic book scrap and I'm in control of it.

Everything looks gorgeous. Logan's big hairy arms are all bouncy and angry, and Tony Stark's suit glints in the light of some alien sun.

Marvel Contest of Champions is a super-powered free to play brawler that's just been soft launched in Denmark.

It features a cast of characters drawn from the comic book publisher's archives, and lets you beat the witty-comebacks out of them. 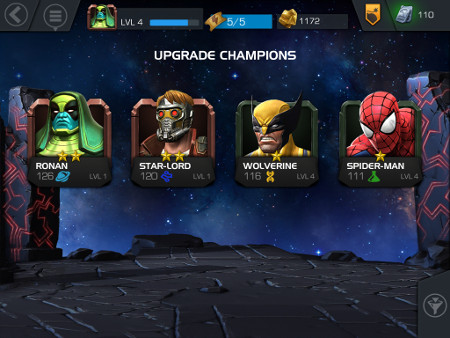 Right now I've got a team of two heroes - Wolverine and Spiderman, and they're barging their way across a card-battler style world, completing quests and grabbing large amounts of the confusing number of currencies the game offers.

I've just added Star-Lord to my team. He was hiding in a crystal. Very little of what is happening makes anything even closely resembling sense.

But it's quite fun all the same. The one-on-one scraps are controlled with a series of taps and swipes. You can block, punch, and unleash more power attacks when you've filled up a meter.

There's a satisfying crunch to proceedings, and it's all much more hands-on than your average superhero-collect-a-thon. We're not talking Street Fighter levels of brawling possibilities, but the punching and kicking is reasonably weighty all the same.

You upgrade your heroes using lumps of space rock and some gold currency. Then there's an energy system to consider, as well as another currency that you can buy cards with. There are some tickets as well, but I can't work out what they're for. Oh, and those crystals too. 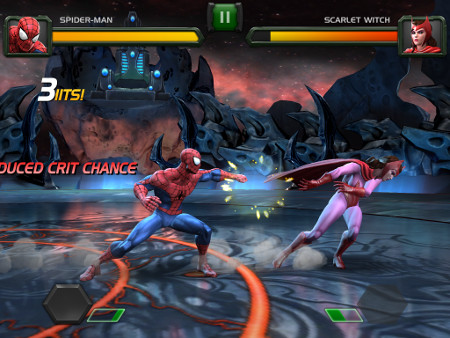 Catalysts can be used to enhance your fighters' abilities, and potions heal them when they've taken a beating. For a game about men in leotards punching each other, that's quite a lot to remember.

Different heroes have different strengths and weaknesses, so you need to create a team that lets you handle most eventualities.

It's all a bit overwhelming really. There are a few niggles with the soft-launch version as well that should hopefully be ironed out by the time the game hits worldwide.

Still, there aren't that many games that let you whomp Captain America with Ronan the Accuser, so if that sounds like it might be up your alley, keep an eye out for Marvel Conquest of Champions in the not-too-distant future.

Check out our hands-on video at the top of the page if you fancy watching the whomps in motion.

Ski Safari: Adventure Time is this month's free iOS game over on IGN