For the longest time, we didn't actually know what type of game Angry Birds Transformers would be.

Yes, you're still attacking flimsy wooden structures in order to knock them down. But now you're doing it with a laser beam, as a robotic bird dashes across a side-scrolling stage.

Your bird - which is dressed up as Optimus Prime or Bumblebee or what have you - runs automatically. You've just got to concentrate on firing at the piggy shanty towns in the background.

You'll also have to transform into a vehicle at certain points to avoid being crushed by falling pillars and other hazards. 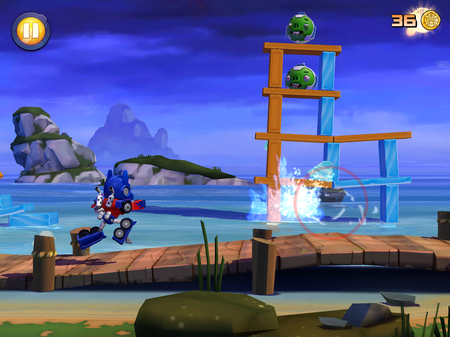 The game is free to play, so you can expect all the usual shenanigans. You can upgrade characters to boost their weapon, armour, and vehicle, and then you'll have to wait a few minutes for that to finish.

But you can't fault Rovio's level of polish, and attention to nostalgic, fan-service detail - right down to a pause menu that looks like you just paused a VHS tape.

You can see the game in action, above. The game is currently in soft-launch in iOS in New Zealand, but it will roll out (kill me) everywhere on October 15th for iPhone and iPad, and October 30th for Android.

Fireproof: don't hold your breath for The Room in virtual reality