Hands-on with Skylanders Trap Team, the iOS and Android title that blurs the line between console and tablet

Those cute plastic figures are a huge selling point for the game's target audiences: young kids enjoying their generation's Monster in my Pocket. And grown ups that have a little too much time and money on their hands.

And for Skylanders Trap Team there's an even bigger talking point this time round: this is the first "full" Skylanders game to hit iPad and Android tablets, and it's really rather impressive. 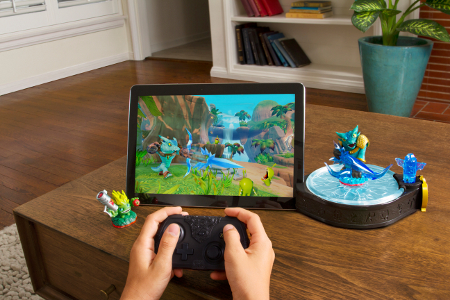 Quite often when you think about mobile and portable ports of games, you think compromise and a downgraded experience. This wasn't the case from what I saw of Skylanders Trap Team running on iPad.

It looks just like the Xbox 360 version. This is the full, unedited, and complete console experience of Skylanders Trap Team, with no changes or cut corners.

You once again assume the role of the Portal Master, this time saving the day by capturing every escapee of a prison for monsters.

Using your current collection of Skylanders, the new Skylanders that come in the Starter Pack, and the digital Skylanders exclusive to this version of the game, you traverse multiple stages of platforming adventure mixed with combat action.

It plays like previous games: it's a third person, run about, jump on platforms, grab collectibles, solve simple puzzles, and punch bad dudes kind of affair.

Visually the game is incredible. It doesn't appear to have suffered a step down in terms of quality, featuring as it does all the shadows, transparencies, lighting effects, and so on that helps to add to the richness of the captivating Skylanders universe on console. 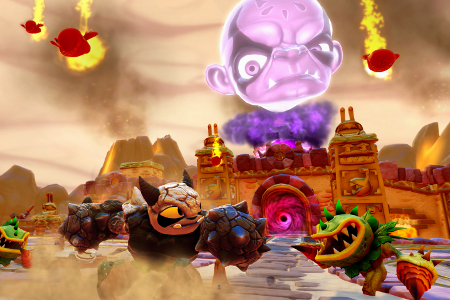 Speaking about hardware, let's talk tech for a moment.

You can download the Skylanders Trap Team app for iOS and Android, and try out the first few areas for free. But what you really want is the portal (starting at around £50+) which lets you bring Skylanders toys into the game.

Plus, you'll be able to use the new Traps which allow you to capture enemies and put them to work for you.

It's completely compatible with every Skylander figure released to-date, and will pull information about those 292 Skylanders down from the cloud as and when it's needed, so long as you're connected to WiFi. 6GB can be set aside for this data, should you want to.

You'll also get a controller. Yep, that's how much of a console experience this is.

You can still play using the touchscreen, and if you've got an Android or MFi controller you can hook that up too. You can even use both in tandem for two player co-op. On a tablet. Crazy. 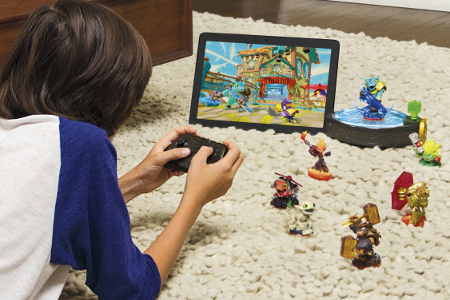 It's all seriously impressive stuff because - and I can't stress this enough - it feels like you're playing a brand new home console game, and all of the spectacle and depth and quality that that entails, but on your iPad.

Skylanders Lost Islands and Skylanders Battlegrounds were all well and good, but the Skylanders community has always asked for a "proper" version of the game on tablet. Well this is it, and it's coming out October 10th, and it's exactly what that community has been asking for, and they should probably start getting very excited indeed.
SEE COMMENTS