All to know about Android Wear, Pebble, iWatch, and more

Just as noted futurologist Inspector Gadget predicted, the fate of the computer isn't in your pocket, but on your wrist.

Now, having a device on your arm that can receive text messages, show a map, or relay information about your surroundings has some obvious benefits. But what about for gaming?

To help you get a grip on the new tech, here's your Pocket Gamer explainer guide to all the smartwatches that can play games - what they're like, how you use them, and what sort of games they can play.

It's still early days, of course. The most exciting thing you can play on a watch right now is Chess. But it could be the start of something new, and we intend to follow it closely. 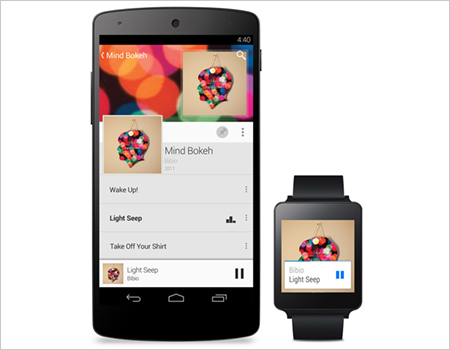 Android Wear is a special version of Google's Android operating system, which is designed specifically for watches and other wearables.

As well as sending notifications to your wrist, you can speak Google Now voice commands into your watch. Plus, Android Wear watches are aware of your location and show context-sensitive data on your arm.

Most manufacturers are opting to use this technology now, and are ditching their proprietary operating systems in favour of Android. From now on, if it's not made by Pebble or Apple, it's probably running Android Wear.

What's the screen like, and does it always stay on?

Android Wear watches can have round and square watch faces. The exact specs of the screen differs from device to device, but they're typically full colour, mutli-touch touchscreens.

By default the watch face shows a dimmed clock when not in use, but you can choose to have the screen switch off entirely if you want to conserve battery.

What inputs does it support?

Android Wear watches sport a touchscreen, a microphone, and sensors like an accelerometer, digital compass, and gyroscope. Some have a heart rate monitor, too.

What does it connect to?

You need a compatible smartphone running Android 4.3 or higher. An Android Wear watch is useless on its own.

It depends on the device, but most are designed to run for a full day between charges.

What sort of games can I play on it? 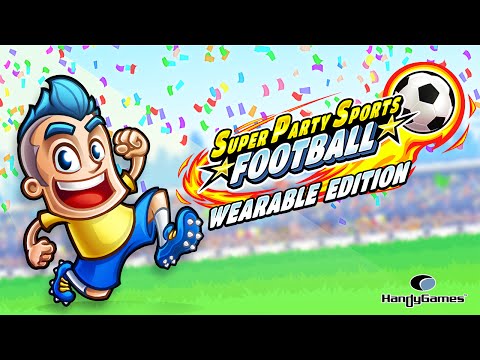 You could theoretically play any game, but you're going to be limited by the low power of the watch and the tiny size of the touchscreen.

For now, there are Flappy Bird clones, and HandyGames has got a wearable version of Super Party Sports: Football that you can play by moving your arm. Expect more creative stuff if these things take off.

You'll find the games on the Google Play store, just like any other Android app.

What Android Wear devices can I get? 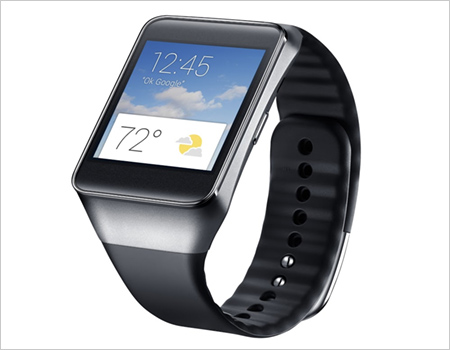 The Samsung Gear Live was one of the launch devices for Android Wear. It's got a 1.63 inch Super AMOLED screen with a square 320x320 resolution. There's a heart rate sensor inside, and the steel exterior is dust and water resistant. 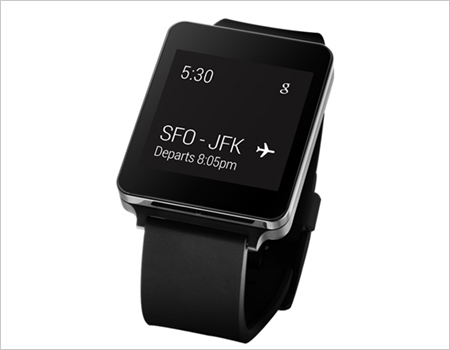 The LG G Watch was the other launch device. This one is also square, and has a 1.65 inch LCD display with a resolution of 280x280. It's also dust and water resistant, but doesn't have a heart rate monitor. 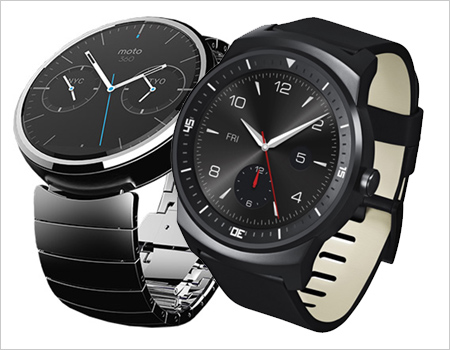 A whole raft of Android Wear devices are on the horizon including the circular Moto 360 and LG G Watch R, the leaked Sony Smartwatch 3 and HTC One Wear, and the teased ASUS ZenWatch. 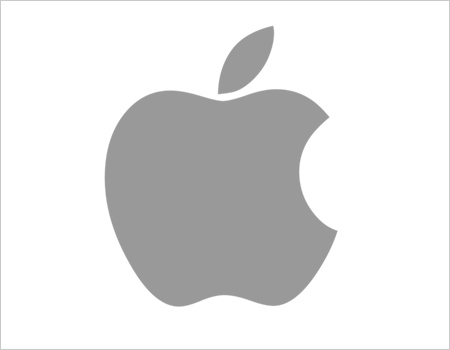 Rumours suggest that Apple will jump into the smartwatch race with a new wearable gizmo. And it will be announced on September 9th.

We'll be watching Apple's next press conference closely to see what Tim Cook has up his sleeve. Literally. 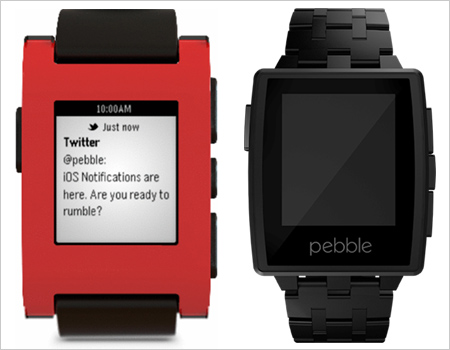 The Pebble is a little different. Take the fact that it works with both iOS and Android devices, and that it uses a black and white e-ink screen like an Amazon Kindle.

It's mostly designed to receive notifications from your device, but it can also run some simple apps directly from the watch itself.

The device was Kickstarted to the tune of $10 million. And while it might lack power and colour, it's still wildly popular with those on both major mobile operating systems.

What's the screen like, and does it always stay on?

The Pebble rocks a 1.26 inch, 144x168 pixel display. But it only shows black and white, because it's an e-ink screen. That's so the battery lasts forever and so it's effortless to read outside (see: Kindle versus iPad in direct sunlight).

Because the e-ink screen is so power effective, the Pebble screen can afford to stay on at all times. There's also a backlight.

What inputs does it support?

The Pebble's got three buttons that developers can use for game controls. And there's a 3D accelerometer in there, too.

What does it connect to?

Pebble can connect to an iPhone 4 or better, as long as you're running iOS 6 or 7. And pretty much any Android device running OS 4.1 will work. Either way, you just download the app to your phone and you're away. It won't work on its own.

The e-ink screen lets the Pebble run for five to seven days. Not bad.

What sort of games can I play on it?

So you can play chess, Asteroids, a Drop 7 clone, and a version of Nintendo's Fire Game & Watch. But the current star of the show is a deeply simple time-sink called Pixel Miner.

You can get the games from the Pebble app on your iPhone or Android.

What Pebble devices can I get?

In terms of screens and specs, there's only one Pebble to get. But it comes in some different styles: there's the colourful polycarbonate Pebble ($150), and the Pebble Steel ($249) which is made, funnily enough, from steel. 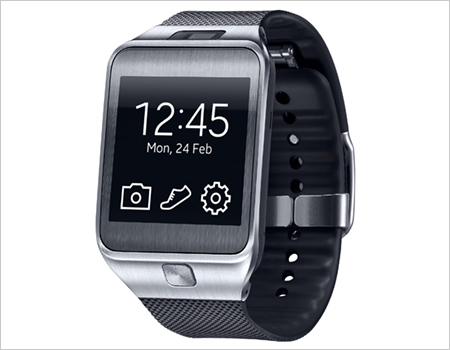 The smartwatch war will likely be fought between Android Wear and whatever Apple's cooking up. But we'd be remiss not to mention a pair of legacy watch families.

The Samsung Galaxy Gear series runs on the Tizen operating system, and these devices only work when paired with a Samsung Galaxy smartphone or tablet.

The Samsung Galaxy Gear and Gear 2 can run some simple games found on Google Play. And if you hack the watch you can run any app you want. Minecraft on your wrist? Totally doable. And totally horrible.

While Samsung has jumped on the Android Wear bandwagon with the Gear Live, it is going back to the Tizen well for the upcoming Samsung Gear S. This thing has apparently its own modem so will be able to make calls, even without a phone. 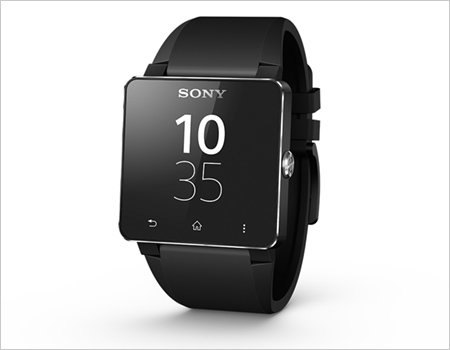 Sony's next watch, the SmartWatch 3, is likely going to be an Android Wear device. But the PlayStation giant already had a pair of wearables out, long before Google made the bespoke smartwatch OS.

The Sony SmartWatch and SmartWatch 2 connect to Android phones running 4.0 and above (any phones - not just Sony-brand ones), and can relay information from the phone and run basic apps. 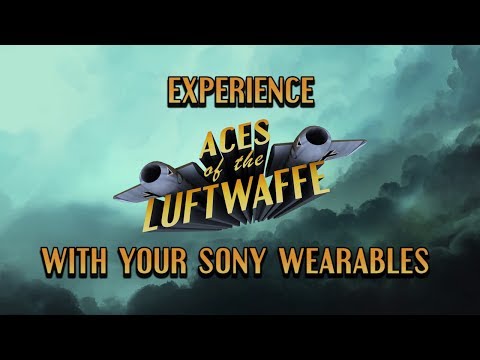 There are some terribly basic games like Snake and Bubble Breaker, and HandyGames has rigged up Android shmup Aces of the Luftwaffe so you control the plane on a tablet by wiggling the watch about.

What do you think? Will you be playing games on your wrist any time soon? Got one of these wearables, or planning to buy one? Let us know in the comments, below.