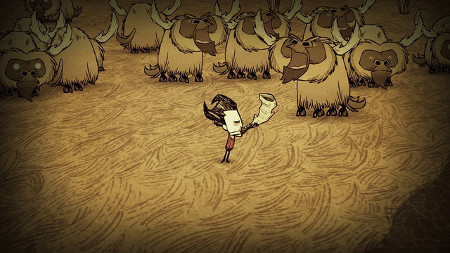 Don't Starve: Giant Edition is set to hit the PSN on September 3rd, meaning Vita owners will be able to get their hands on the indie survival gem from the middle of next week.

The Giant Edition includes the Reign of Giants expansion pack, which features new playable characters, year-round starvation, extra biomes that make the bigger world much worse, and another save slot so you can have two games on the go at once.

Oh, and there are giants as well, obviously.

The game will be Cross Buy, but because Klei had to tinker with some code to fit the game onto the PS Vita, it won't be Cross Play enabled, which is a shame.

Don't Starve: Giant Edition will cost €13.99 when it lands in Europe, which should translate to about a tenner in the UK.
SEE COMMENTS

Static Sky is an upcoming Unity-powered cyberpunk shooter for iPad