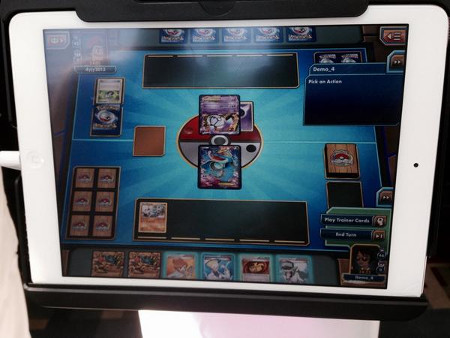 The Pokémon Trading Card Game Online is making its way to the iPad in the not-too-distant future. Twitter user @TheJWittz apparently spotted the game out in the wild at the recent Pokémon World Championships

And later on a spokesrobot from the Pokémon Company confirmed to Polygon that the game will indeed be winging its way to the App Store at an unspecified point in our future. That could be right now. It isn't though.

The game is a version of the PC and Mac card game that's pretty much a digital carbon copy of the physical original. It's free to play, you can buy booster packs, and if you love Pokémon and cards you're probably already playing it.

You can also enter codes from packs of cards you've bought in real-life to use them in the game. Whether all these features will make it across to the portable version remains unclear though.

We will, of course, let you know as soon as we hear anything about a more solid release date for Pokémon Trading Card Game Online. And whether it gets a slightly snappier name.