This week, members of the Pocket Gamer and AppSpy crew are at Gamescom in Cologne. Between eating our collective body weight sausages, we'll be bringing you quick-fire impressions of our favourite games on show.

It's true that Back to Bed shares the MC Escher-inspired wall-walking and impossible architecture of Monument Valley. Not to mention its towering isometric viewpoint.

It's like playing ustwo's game in the middle of a nightmare. One directed by David Lynch.

The idea is to re-route a sleepwalking man named Bob by picking up apples and plopping them down in Bob's path. Whenever he hits an apple (or other obstacle) he turns clockwise and wanders off into a new direction.

That new direction will hopefully lead Bob into the safety of his bed. But its thankfully not game over if your sleepwalking charge topples off into the abyss - he'll just respawn at his original location. 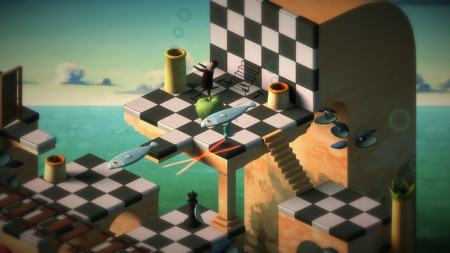 The controls are worthy of mention, too. You simply drag your finger across the screen to guide Subob (the limbless dog in charge of Bob) around by the nose. It's simple, and works wonderfully.

Back to Bed has a truly bizarre aesthetic, but the puzzles we've played so far have been relatively tame and predictable. A whole lot of placing down apples, to be honest.

Screenshots suggest, however, that later head-scratchers might meet the absurdity of the excellent presentation. We'll let you know when the full game comes to the App Store later this month. You can expect it on Android at some point after that.

Want more? Check out our growing collection of Back to Bed articles!

You don't want to fall asleep and miss this