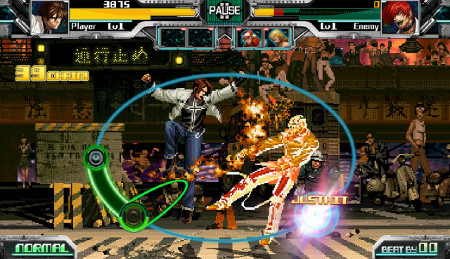 SNK Playmore's Bronze Award-winning mash up of a brawler and a dancing game, The Rhythm of Fighters, has had two new DLC packs added to it.

The first is music from The King of Fighters '97, the second features tracks from Metal Slug Defence. Both packs offer four tracks, and they'll set you back £1.99 / $2.99 each.

The Android version of the game has already been updated with the two downloadable playlists, while iOS gamers are going to have to wait for a change.

At review we said "The Rhythm of Fighters is quite the odd duck, but it's also interesting enough to keep you entertained for a good long while."

If that sounds like the sort of thing you'd like to tap away your troubles with, you can grab the game from the Google Play Store for 69p / 99c [buy] and from the App Store for the same low price [buy].

Out at midnight: 80 Days is a steampunk retelling of Phileas Fogg's round the world trip for iPad and iPhone

The Rhythm of Fighters is now free to play, owners get five free songs