All filler, no killer

The Assassin's Creed series has always had the potential to be a huge, history-spanning RPG. However, it's always been realised as more of an open-world action-stealth game.

Assassin's Creed Memories is Ubisoft's attempt to tie together all previous games in the series into a sprawling RPG, then. But, it being a free to play mobile game, it's unsurprising to find it mostly involves navigating menus.

There's nothing wrong with menu-based RPGs on principal. But it means your exploration of history is mostly left to the imagination. However, Ubisoft has tried to spruce up the presentation a little with animations that take too long to load. 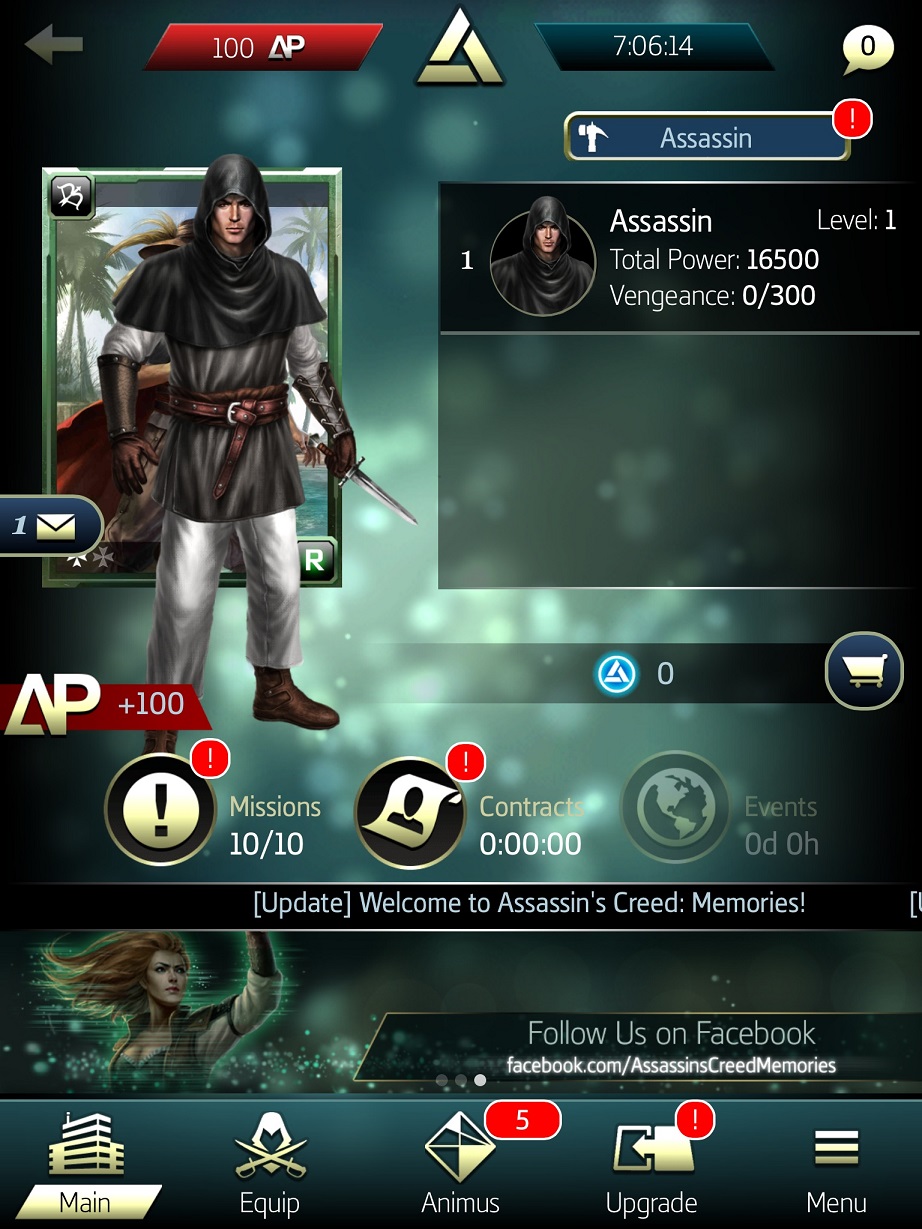 Seeing the QuickTime logo after tapping a button is off-putting at first, annoying a little later on. Unfortunately, it happens regularly in the current pre-release version.

That aside, in the current version of Assassin's Creed Memories, there's surprisingly little card battling to do. In a game that introduces the Guild vs. Guild card battles as the "meat of the game" in its tutorial, it's scarcity is a little peculiar.

What we do have, then, is Abstergo Entertainment's mobile version of the Animus to play around with. It's here that you spend time gaining new ally cards, gear, and completing missions to gain experience.

Once you've got your bearings around the myriad menus, you soon find where the rhythm in this game is.

You start by creating a character and disguising them as an assassin, crusader, or an archer. Your disguise matters little, as it's the gear and weapons you bear underneath it that decides your stats.

Once you've got a guild, you're able to start doing missions. These send you to familiar locations from previous Assassin's Creed games and have you playing as the series's past protagonists. Ezio Auditore, Connor Davenport, and the rest all appear.

There's a slight story scene at the beginning of the missions that is best summed up by the image below on the left. In other words, someone needs to be killed or captured.

Each mission area (Colonial America, Renaissance Italy, and so on) gives you an overhead map to look at. On this map are marked points you can tap to either gain gold, or perform mini-missions. 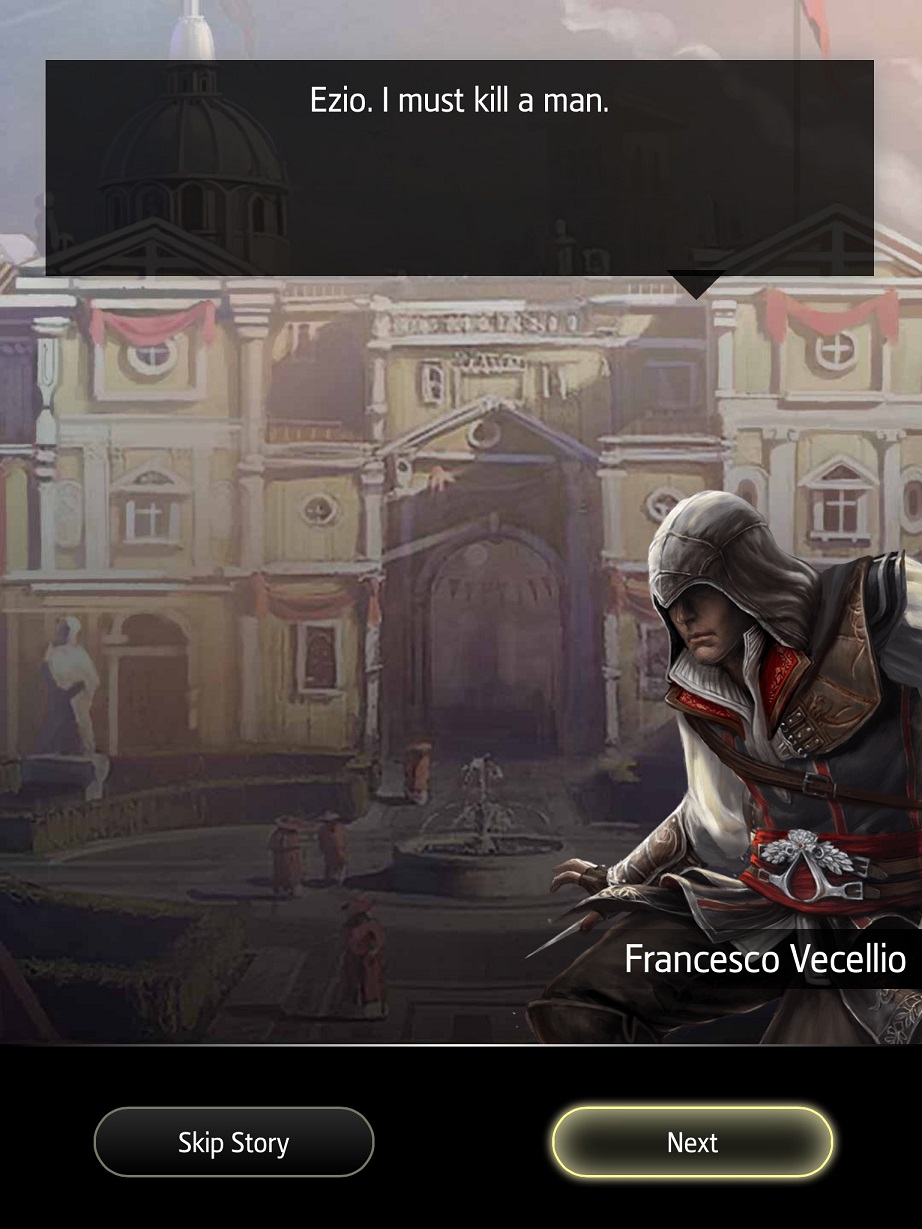 These mini-missions include ripping posters off walls, taking out guards, and synchronising viewpoints - just like you do in other Assassin's Creed's games.

Of course, it's just menus and animations here, and your chances of success are based on percentages. You'll likely be successful most of the time, earning gold and experience. But if you aren't, you can pay to hack the Animus and come out successful anyway.

Eventually, after you think you've levelled up enough, you can try to take out your target. This is played out in a mini-game that shows you chasing them across rooftops.

You have to tap as fast as you can to catch up with them and knock them out. It's usually very easy, almost pointlessly so. In fact, it feels like another attempt to make Memories feel more animated than it actually is - an unnecessary goal.

This is the main portion of the game at the moment. You do mission after mission, mostly repeating yourself over and over.

It feels like filler, really. But hey, it's a way to keep you occupied while waiting for the timers to count down, I suppose.

Yep, there are timers for contracts as well as events. Contracts see you paying someone to fetch new gear and allies. Usually it takes up to eight hours, but predictably, you can pay to speed the process up.

Events haven't been activated in the pre-release build, but I'd imagine they involve Guild battles and other ways to earn new equipment.

Another thing that's currently unavailable is the Abstergo Credit purchases. These Credits can be earned in missions and bought through the in-game shop. You can spend them on packs of items, allies, and weapons. The packs seem to be randomised, so it's probably similar to buying a pack of Pokemon cards or football stickers.

The reason you're looking to improve your gear, your character, and your allies is so you can fare better in the Guild vs Guild battles. These are Ubisoft's biggest boast, allowing for up to 20v20 multiplayer battles. 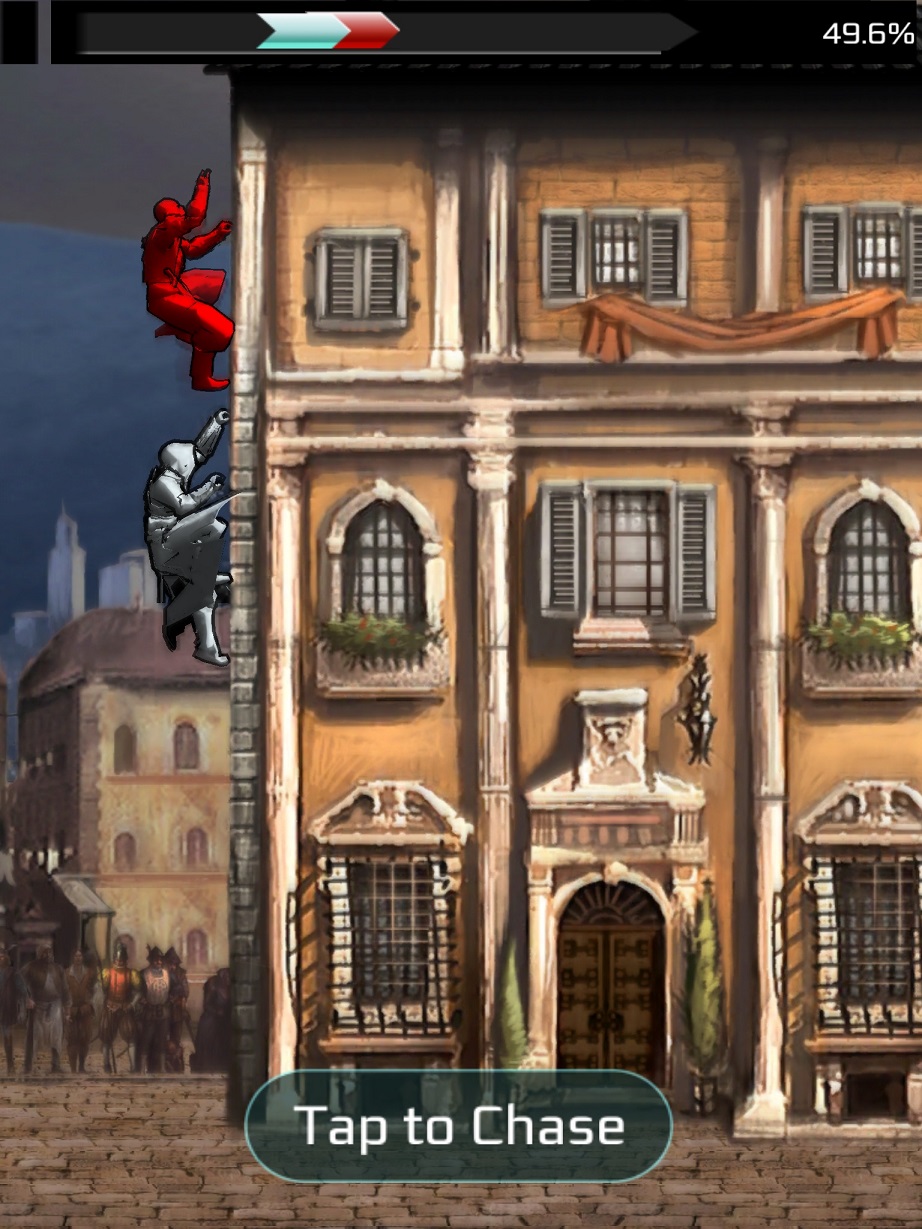 So yep, it's the card battling portion and plays like most other card games, really. You could effectively replace "Guild" with "Deck", for instance. You want to beat your opponent and can increase your odds by having superior stats, tactics, and special moves (courtesy of your allies).

From the little of these battles I've played, it seems that the allies you have are critical to success. As such, you're able to merge them to improve their melee and ranged attacks and defences. Unfortunately, I've not been able to play more to get a fuller impression.

Assassin's Creed Memories will please fans looking for a casual menu-based RPG and card battler, then. You'll see familiar faces and get to be revisit the history-based fiction they exist in.

I found it a shame that the RPG portion of the game felt like a way to bide your time while you wait for other events to countdown. I'm sure a much more engrossing RPG experience is possible using the Assassin's Creed universe.

The other point of note is that it has some performance issues currently. This is certainly something Ubisoft could fix before its global release, though.

Lastly, I would have preferred for Ubisoft to focus on lessening the repetitiveness of the missions by adding more depth to them.

That is, rather than producing animations and pointless mini-games that add little to the experience as they have (and add to the grating repetition).

The thought that purveyed my time with Assassin's Creed Memories is that it would be better as two separate games.

An effort has been made to provide a single player RPG and a multiplayer card battler in one package. I've mostly spent my time with the former and found it feels far too subservient to the card battling portion to warrant a long time playing it.

Unfortunately, with the timers and shallow missions on offer, it's clear that it's meant as just that - a time sink.