Appointment with F.E.A.R. is Tin Man Games's next Fighting Fantasy adaptation for iOS and Android

And it's looking a bit special

Tin Man Games has released some more information, and some more screenshots, about its upcoming gamebook adaptation Appointment with F.E.A.R.

The game, which recently came second in Pocket Gamer's Big Indie Pitch event in Brighton, is a pretty big departure from the other entries in the series, taking a far more comic-book approach than its predecessors.

It's still based on a Fighting Fantasy book of the same name, but a new comic book engine is whirring away under the hood.

You play as a superhero going through your day to day routine. That routine includes locking fists with 30 villains, exchanging quips, and making choices that directly effect the outcome of the story. 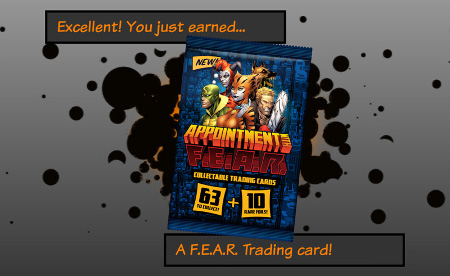 "This is our first foray into a new area for interactive fiction and gamebooks. Appointment with F.E.A.R. cried out to be presented in a new and stylised way and as the new engine started coming together visually, we knew we were on to something pretty special. We’re looking forward to getting our teeth into some other comic book licenses in the future too!"

Appointment with F.E.A.R. Is set to hit the App Store, the Google Play Store, and the Amazon Appstore at the end of August. We will, of course, let you know when we've got a more concrete release date.

In the meantime why not check out the images in the gallery all the way back up at the top of the page.

How to survive the Arachnid Quarter - Hearthstone: Curse of Naxxramas tips and guide

[Update] Out at midnight: Appointment with F.E.A.R. brings back the '80s camp of superheroes