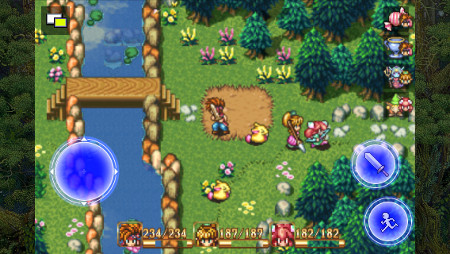 Secret of Mana has been updated with a few tweaks that make the Bronze Award-winning RPG port an even more enticing proposition.

Chief amongst the new features is MFi controller support. The touchscreen controls have also been tweaked to give 360 degree movement instead of the 8-direction D-pad it offered before.

On top of that the game now supports Retina displays, which means those pixels have never looked smaller. There are a few other tweaks as well to make sure the fonts and the UI are still usable on higher resolutions.

When we reviewed the game we called it "a charming adventure packed with memorable characters, scenarios, and gameplay," adding that "Secret of Mana remains enjoyable in spite of control issues and minor audio quirks."

Hopefully these new control options will go some way to fixing those complaints. You can find out for yourself by grabbing the newly updated game from the App Store for £5.99 / $8.99.