With it's cut-down card selection and extensive tutorials, the 2015 iteration of Magic: Duels of the Planeswalkers is very clearly aimed at people new to the grand-daddy of collectible card games.

But for a neophyte it can still feel like being thrown hard against a wall. A wall made of cards, mind, but they're edge on and made of sturdy cardboard and we all know how much paper cuts can smart.

However, as our glowing review of the game made clear, it is entirely worth the risk. So to save you the toil - and the antiseptic - we've tried to smooth the edges off the experience with a useful extension to those useful tutorials.

If you don't know the rules to Magic, don't be ashamed of telling the game as much and letting it guide you through all the tutorial stages. Listen carefully to those soothing dulcet tones and take careful note of what they tell you.

Magic is a deep and complex game, and it takes time to fully digest both. Don't rush it. Stay with the helpful pop-ups that game provides during play until you're sure you've learned what they're urging upon you. 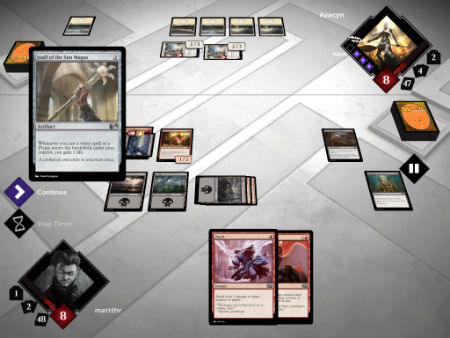 Even once you've been through the first five tutorial levels, there's still a number of card effects you won't have come across before. When you see one, tap the card to bring up full view and you'll get an information button that should explain what the keyword means.

It's also worth pointing out that you need to take the card text literally. If a card says it affects "every enchantment" then it affects every enchantment, yours and your opponents. A lot of apparently useless or confusing cards suddenly seem extremely powerful once properly understood.

When you're ready to face Polis Crusher in your first full game during the sixth tutorial level, you'll need to pick a deck.

You're forced to chose a pre-built, two-colour deck of sixty cards with twenty six lands. This is a very important choice because while you can swap your starter deck any time you like in your attempts to beat Polis Crusher, once he's down you're stuck with that deck as your set of starter cards for the rest of the game.

Unless you pay for one of the packages with more cards, obviously.

But presuming you want to do things on the cheap, you need to chose a deck you like. Unfortunately, most of them aren't particularly good, containing little but weak cards with weak synergies between their effects. 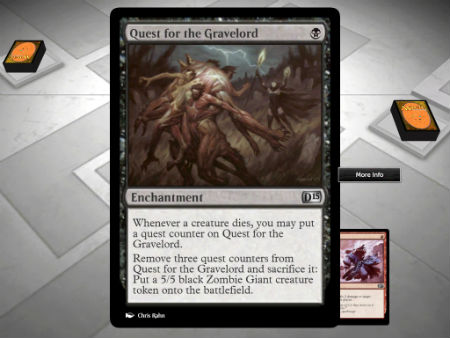 Now, much as I love the game, I wasn't able to try them all. I ended up sticking with a Black/Red deck, which I found workable and fun to play. At that point, however I was missing two important bits of information.

First, all the deck lists are now online. Second, I didn't realise that the first stage of the single player campaign is against mainly black decks.

Magic has a level of colour opposition, meaning certain colours work better against certain other colours. No prizes for guessing that the primary foil for black is white. Green is also pretty useful.

With that in mind, and with a quick eye over those card lists, I would recommend that new players consider starting with a White/Red or Green/Red deck. Red is full of direct damage spells which are colossally useful, especially for the inexperienced.

But if you try those, and find them wanting, don't be afraid to experiment with some of the others until you find one that suits. They're all pretty pants, to be honest.

As soon as you get your first victory, you'll get a free card to add to your deck. You'll also be instructed to remove an existing card to make way for it.

By default Magic 2015 automatically selects the lands, the cards that give you the different coloured mana you need to cast spells, for you.

You can turn this off however, by going to Settings, then Advanced, then toggling "Auto Land". And you totally should. 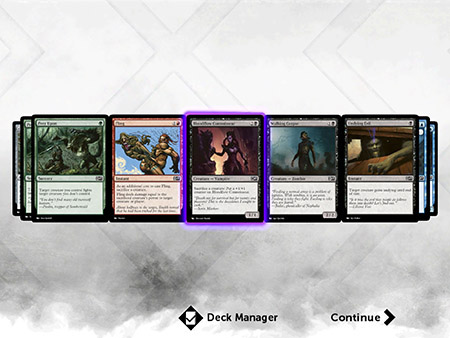 There are all sorts of "rules of thumb" when it comes to how many lands you should put in your deck. It's tempting to listen to them because this is an important decision. Put in too few and you won't be able to power your spells. Too many and you won't have any spells to power.

But like most rules of thumb there are exceptions, depending on what the rest of the deck looks like.

That automatic option presumes you want to stick with the most common advice of about 40 percent land. But as your collection grows and your deck changes, the proportion of land you need will also change.

If you run lots of big, expensive spells, or if you prefer a slow-paced board control style you'll need more land. If you prefer to pack your deck with tiny critters or play in a fast, aggressive style, you'll probably need less.

It'll continue to rise and fall as your deck mutates. Don't go below 20 cards in a 60 card deck, else you'll spend most of your games starving for mana.

You probably noticed my fixation on a 60 card deck. That's the minimum the game allows, and it's what you want to stick to.

However tempting it is to play with all your powerful cards at once, doing so just results in a bloated deck where you can't work the synergies between your card effects because the chances of you drawing two that work together are hugely reduced.

You'll start with a two-colour deck and I'd stick with a two colour-deck, largely for similar reasons. There's the added danger of having the wrong types of lands for the spells in your hand, too.

You can consider a one-colour deck if you collect enough cards to make one. They can be very powerful, because you'll rarely be short of mana. But your opportunities of finding interesting combos to play is slightly reduced. 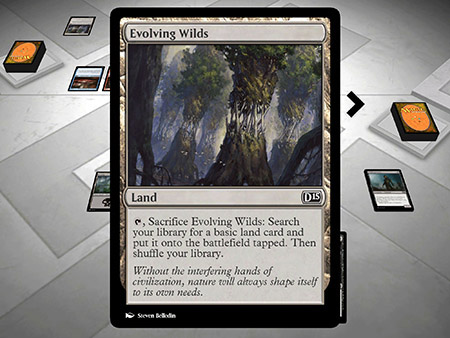 It's kind of hard to talk about synergies and combos in a short guide because there are so many. But I'll give you one example from the red/black deck I started with to give you a flavour of what I mean.

It contains two Bloodflow Connoisseur, Black creatures, which get permanent buffs if you sacrifice other creatures to them. Then, on the red side of the deck, there's Krenko's Command, a cheap spell that puts two rubbish creatures into play.

So what you need to do, obviously, is try and get the one of the first two cards out, then cast Krenko's Command. You then sacrifice the mewling goblins to buff the Connoisseur.

There's lots of others, and plenty of card-specific guides on how to use them out there on the internet. As your collection builds, look out for cards that work well together and make sure you put them in your deck and keep them there.

After all that advice on building your deck, I can't really close this article without discussing briefly how to use it.

One of the things I struggled with when playing Magic 2015 was remembering that it isn't Hearthstone. In that game, you summon creatures and, normally, smash them into something at the earliest opportunity.

Doing that in Magic is suicidal because your opponent choses what to block with what, and anything that isn't killed in the clash is fully healed once the fight is over. Plus, your attackers won't be able to block for you during your opponents' turn. 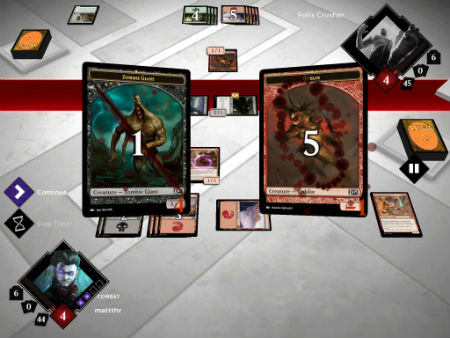 So, before attacking, pair off the creatures on both sides of the board in your head, as the defender would do to their best advantage. Unless you can guarantee that you'll either kill one of his creatures, or all of yours will survive, it's probably not worth piling in.

There are exceptions, of course. Especially late in the game when players are low on health and there are lots of other spells in play. But learn to do that pairing off instinctively and you'll soon get a feel for making the right choices in combat.

Magic is a game of colossal depth and subtlety, and you'll no doubt learn an awful lot more about its intricacies as you play. Hopefully this brief guide will have given you enough to get you past that painful learning phase so you can enjoy the game proper.

Who knows, it might prove a gateway into the endlessly fascinating world of the tabletop version, with its thousands and thousands of different cards, of which Duels of the Planeswalkers is a mere snapshot.

Magic 2015, the Silver Award winning digital version of the classic CCG, is now out for Android

Magic 2015: Duels of the Planeswalkers