Feet off the ground

The influence of Minecraft on the Bronze Award-winning Supernauts (and so many other games) isn't hard to spot.

But what you certainly wouldn't have known is that it was originally more akin to LittleBigPlanet.

This is just part of what Grand Cru's co-founder Mikko Wilkman revealed during an interview with PocketGamer.biz.

Although Supernauts is Grand Cru's first game, to the team behind it, it felt like the second game. This is on account of the original version of Supernauts being scrapped and reworked after a whole year of production.

"The first iteration was much closer to a platformer with user generated levels," Wilkman said. "If you think of a mix between LittleBigPlanet and Minecraft you should have a pretty good picture." 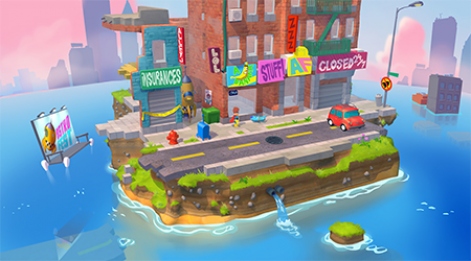 As you can see in the concept above, the first version of Supernauts wasn't set in space - it took place on Earth. It also had a straight up heroes and villains set-up.

As Wilkman also revealed, Supernauts used to have jumping and the game's challenges were based around that ability. Just like any other platformer, really.

As it turns out, though, Grand Cru decided that the original idea behind Supernauts wasn't working out too well.

It then took two more years to launch the game into space, and shift its focus to rescuing citizens and building them homes.

Wilkman also talked about the game's free-to-play design, encouraging the community's creativity, and the struggle of getting the game's audio right.

All of that and plenty more is ready for you to read over at PocketGamer.biz.

If you haven't tried out Supernauts yet, then you can download it for free on the App Store.

Out at midnight: Sky Tourist Blitz Trip is a sequel to the Silver Award-winning original

[Update] Sky Tourist Blitz Trip is snappier than the original, swings onto iOS on July 10th