PGC 2014: The best of the rest of the Very Big Indie Pitch in Helsinki

You must know all about the (Very) Big Indie Pitch by now.

Loads of indie game designers rock up, sit down, and try to explain their upcoming apps to journalists and other industry experts in brutal three-minute long pitches.

Our latest happened in the heart of the mobile games industry in Helsinki, Finland, as part of our Pocket Gamer Connects conference. And it was huge marathon session, with almost 50 developers.

Zombie Catchers
By Two Men And A Dog - Coming in September 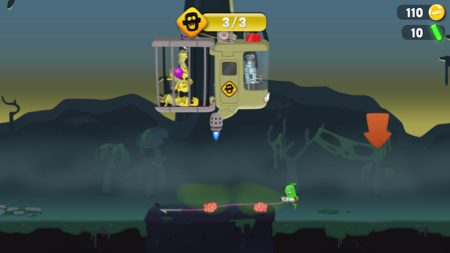 Of all the games I played during the Very Big Indie Pitch, Zombie Chaser is the one I most want to play again.

Your job is to hunt down zombies by using a harpoon gun, bait, and a big net. It's got loopy knockabout physics, and sharp, intuitive controls that makes nabbing walkers easy.

I'm not sure about the free-to-play-style meta game, where you harvest zombies for currency. Seems like a nuisance barrier to more zombie-nabbin fun. But we'll give it the benefit of the doubt for now.

Block Amok
By All Caps - coming in a month or two

What does an endless physics puzzler look like? Basically, it means every time you topple a flimsy wooden structure, another pops up in its place. Keep knocking them down until you run out of ammo.

You can demolish these randomly generated structures with different guns like cannons, machine guns, and a tank that fires three missiles. And there are handcrafted levels in the daily challenge mode.

Ocmo will take some time to master. It's certainly not the sort of game that you'll pick up and play during a three minute pitch.

Inspired by Super Meat Boy and reminiscent of the ninja rope item in Worms, Ocmo is all about swinging through obstacle course levels on a grappling hook. A clever system highlights bits of scenery you can latch onto.

Getting from A to B takes some concentration. And then there are lots of advanced tricks, like swinging in circles and slingshotting out to get more speed. This one is definitely for the most hardcore among us. 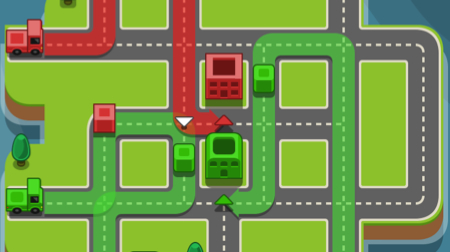 RGB Express is a lot like Trainyard. Sure, it involves trucks rather than trains and you're picking up parcels along the way. But you still have to draw out paths to get coloured vehicles to same-coloured stops.

But Bad Crane's game has one small feature that makes all the difference. When you're drawing out each path with your finger, you get to see ghostly representations of where and when the other trucks will move.

This way, you'll get to see where collisions will happen while you plot your puzzle solution, and don't have to go through the nuisance rigamarole of trial and error. This simple little tweak might give RGB Express the edge.

Inspired by rage quit games like Super Hexagon, but with cartoon art rather than abstract shapes, Asslay Gore throws enemies at you in rapid succession and you need to remember how (or if) to kill them.

It's rough around the edges and the timing takes some getting used to, but this is shaping up to be an addictive little game to test your skills and your patience.

The Adventures of Bertram Fiddle
By Rumpus Animation - coming in October

The pitch for quirky cartoon point-and-click The Adventures of Bertram Fiddle made me sad.

Animator Seb Burnett has been playtesting the game with different people and while women love it, girls love it, and nostalgic adults love it, "12 year old boys hate it". Want more guns and explosions and perfectly square cubes of dirt, no doubt.

But 12 year old me would have liked it, Seb. And 25 year old me liked it too, with its goofy character designs, professional voice acting, and classic puzzle design. Sign me up.

Appointment with F.E.A.R.
By Tin Man Games - coming in August

Gamebook creator Tin Man Games is honest and open about the fact that Inkle's books (the Sorcery! series) are slightly more impressive than its own digital library.

But rather than wallow in self pity and ice cream, Tin Man is taking this as an opportunity to up its game. So it's now using a new engine, trying different types of book, and will even throw in some 3D features in future apps.

The first game to get this special treatment is Appointment with F.E.A.R.: a Steve Jackson book that's being reimagined as an interactive comic book. You even get to design and name your own superhero avatar.

I'm rubbish at Kindo. There's no two ways about it. I never won a single match of this ruthless territory-grabbing board game. Then again, I was playing against the bloke who designed it, which seems a little unfair.

Win or lose, you can't fault this game's minimalist, Letterpress-inspired aesthetic. You just get a stark white screen, covered in squares. One player is orange, the other is green, and bold icons denote fortified cells or home squares.

There's plenty of strategy involved, and it truly earns Space Bears's description: "a medieval board game for the 21st century". 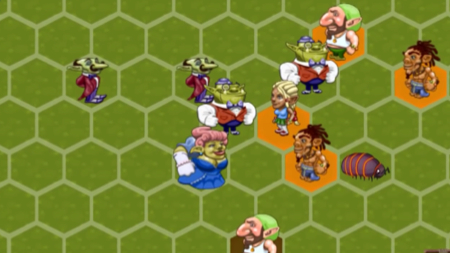 Has there ever been a turn-based tactical football game before? There must have been, the idea is perfect. Well, even if there has, there probably hasn't been one with trolls, elves, and other fantasy monsters.

Even the ball is a creature, and this bug causes chaos by skittering across the map just when you're lined up to score a goal.

Buglantic Football is still early in development and is rough around the edges, but the idea is sharp and the execution is promising. We're looking forward to this one.