As a celebration of the past quarter decade of Final Fantasy games and music, Theatrhythm Final Fantasy didn't take long to find fans on the 3DS.

But these fans wanted more for Theatrhythm. They wanted more characters, more songs, and more play modes to experience.

The upcoming Theatrhythm Final Fantasy: Curtain Call is poised to contain all of this on one tiny cartridge - but we wanted to know the story behind its development and what lies ahead for Theatrhythm after this.

Square Enix was kind enough to set us up with an exclusive E3 interview with game producer Ichiro Hazama, who - via translator - was happy to talk Curtain Call with us.

Pocket Gamer: It took a while for Theatrhythm Final Fantasy: Curtain Call to receive a Western release date - was there ever any doubt that you'd bring this over to your fans in the West?

Ichiro Hazama: In terms of determining release dates for the Western market, it does kind of depend on each region and what each region determines to be the appropriate date. So, that's part of the reason there's a bit of a delay between the Japanese and Western versions.

But in this case, and I feel kind of sorry about this, there was a bit of lag between when the Japanese version was created and when we started working on the downloadable content. That might have contributed to the delay of the Western release - there aren't many people in the development team.

After they finished with the Japanese version, they jumped right into DLC creation but they were doing this in tandem with the localisation for the Western release. 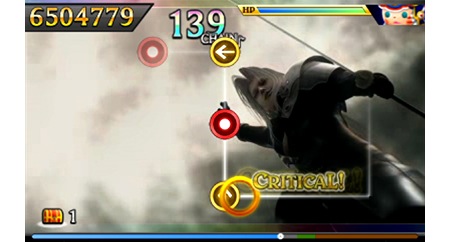 One complaint - and that might be too strong a word - that players had with the original Theatrhythm was that it featured excerpts of songs rather than the full songs. Curtain Call continues this trend - why did you opt for this approach?

I totally understand, but - for example - 'Dancing Mad' is a very long song!

Considering that we wanted to pull in titles from spin-off games, our playlist would have been pretty enormous. And that brings up the issue of capacity. If we were to include all of the songs in their full length, then the game wouldn't be able to fit onto the cartridge.

At the same time, playing the song in its full length also makes it hard to keep up your concentration.

In the first Theatrhythm, there were comments - like you said, kind of 'complaints' - about where songs were cut, particularly 'Battle with Seymour'. In Curtain Call, there are songs that will make a comeback - but we made sure to cut them at different points in the song.

How did the team decide on which characters to add in Curtain Call? Do they still work the same way they did in the 3DS release of Theatrhythm (with skills and items), or is it more streamlined like the mobile version?

In terms of mechanics and how the characters work in this game, it's very similar to the last Theatrhythm Final Fantasy (for 3DS).

We wanted to keep that RPG element so players can enjoy equipping items onto their characters and customising them with skills.

In terms of selection, it's a tough process. If we allowed the development staff to decide on their own as to which characters should be included, they would lean towards certain titles and there might be a conflict of interest.

So, we did what we did with Dissidia - we took polls on which characters were popular and made our decisions from there on which ones to include. 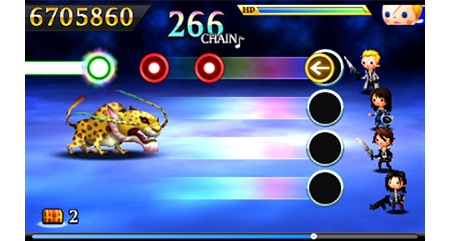 Another thing to add - because this is the first time anyone's asked about the selection of characters - is that if we went back to the trend of picking fan-favourite characters, there'd be a trend towards one game (which is probably Final Fantasy VII, since its so popular), and we didn't want it to be biased.

In the first iteration of Theatrhythm, you could only pick three characters - more or less - from each Final Fantasy title, and you couldn't make a full party of characters from the same title.

I felt that wasn't very user friendly, and we tweaked that part with some titles in the Final Fantasy franchise. So, you should be able to make a four-person party with characters from the same title. That doesn't apply to all titles, but we tried our best to incorporate that.

What was the biggest challenge you faced in creating the online multiplayer mode?

If we were to ask someone who was actually on the development team, I'm sure she would come up with lots of hardships and challenges that she had to overcome. From my standpoint, though, it was more about instructing them to make everything fun to play with.

So, unfortunately, I don't know the nitty-gritty of the challenges.

But the most important thing I felt with developing the multiplayer function is the motivation, and to make sure we had a clear goal in developing that mode.

Also, with this game, you're limited in what you can express in the picture and what you can display. So, another element to which I paid close attention was making it visually clear who was winning and who was losing.

That's something we had to continuously tweak in the development process, and it didn't reach its final form until near the end.

When you think of an online mode, one of the biggest frustrations is not knowing why you lost. If you watched the Square Enix Presents programme where I competed against Yoshida-san in Theatrhythm, it was clear to see how I lost - as well as what attacks and interferences were thrown at each player, and how these contributed to who won or lost. 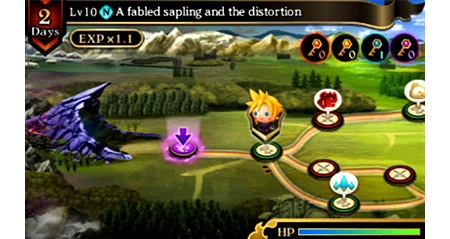 Do you feel that there's room for Theathrhythm to grow past Curtain Call?

In terms of Theatrhythm Final Fantasy, Curtain Call will be the last iteration of it.

That being said, we're going to keep it as our baseline and add to it in terms of DLC and continue to make it a more complete version of the game.

Finally, do you have anything you'd like to say to your fans in the West both of Theatrhythm and Final Fantasy?

Of course. As the producer of the game, it's very easy to say "this is a very fun game!" and to promote it - but, honestly speaking, it really is a fun game and I want people to try it out.

And when the fans play these games, it has to feel like a Final Fantasy game or players have to be able to sense that element of Final Fantasy.

So, with all of the titles that I've produced - and with the titles I'll produce in the future - I plan to continue to have that mentality, and will make sure that fans of Final Fantasy will enjoy these titles and get a sense of nostalgia from them.