We scoped it out for you

Some of us at the Pocket Gamer camp had mixed feelings about Hitman: Sniper when it was announced.

After all, how much fun can you really have when staring down the barrel of your gun to assassinate a completely oblivious target?

The answer is "a whole lot" - and Hitman: Sniper is shaping up to be an absolute treat for mobile.

Lining it all up

In Hitman: Sniper, you slip into the familiar skin of Agent 47 who's given a list of targets to neutralize.

All of these marks come from an Eastern European syndicate known as The Conclave, and they all like to mill about in heavily-guarded mansions.

Fortunately, you've got the firepower and training to take them out from a distance - although Hitman: Sniper isn't a simple shooting gallery.

Each level ends when you kill your mark, but - paradoxically - you absolutely do not want to do this right away.

This is because you'll earn a higher score if you take out more of your mark's guards first. At the same time - more kills means a greater chance of being discovered.
"It's a classic risk-versus-reward-dilemma," Square Enix told us before walking us through a level. 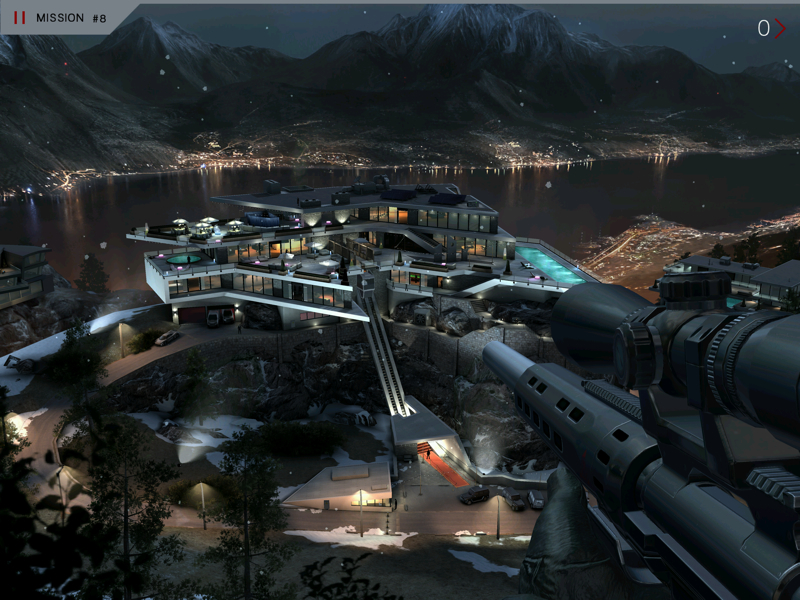 What's really amazing about Hitman: Sniper is how absolutely interactive each level is.

As you swing your scope around the various rooms of a mansion, you'll see thugs engaged in all manner of activities. They'll walk out of rooms, they'll switch off lights, and they'll even check their smartphones while playing a game of pool.

Noticing a cue ball lined up directly in front of the 8-ball in this situation, I took a chance and fired at the enticing white orb.

It quickly sank the 8-ball, and touched off an argument between the guards.

This, in turn, led to one storming off into another room of the mansion which he wouldn't have gone to otherwise - which was cool enough as it allowed me to gack the one who stayed behind with a quick tap - but Sniper made me feel positively brilliant for finding a gimmick that was hidden in plain sight.

This is all part of Sniper's main objective - which is to let players be creative and "puppeteer" the whole assassination scene for as long as they can.

Luring guards down to the car park by shooting an SUV to trigger its alarm is another example of this creativity, as is shooting an ice sculpture to send innocent civilians fleeing for cover. 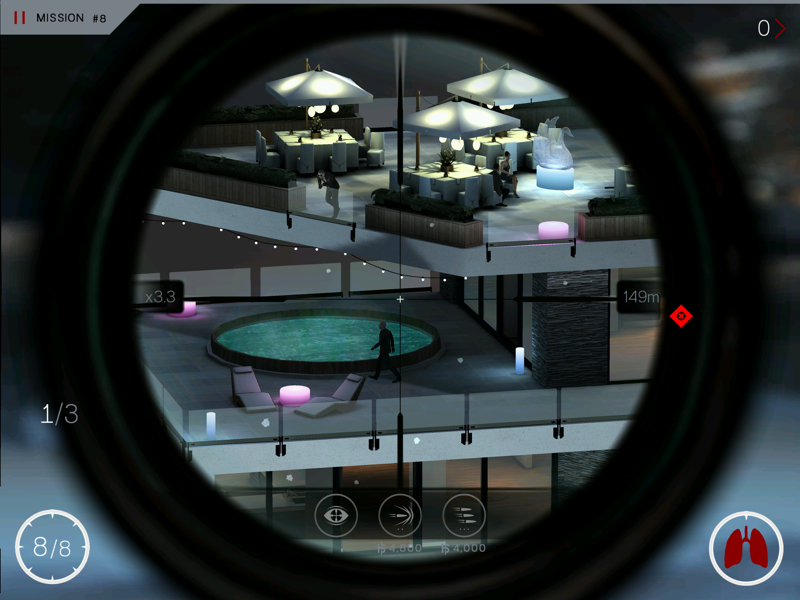 All told, the puppeteering of a level can go on for "about eight or nine minutes" at maximum before the mark becomes jittery and flees.

If they escape, you naturally botch your contract and lose the level. If you bring them down en route, however, you'll earn a mountain of points for stretching out the drama for as long as possible.


Something old, something new Another highlight of Sniper is its a wonderfully tactile reloading sequence that has you swipe to pop out a clip, jam in a new one, and ready a bullet in the chamber.

You can skip the swipes and let the game handle it automatically, sure, but the reloading goes faster - and feels much more satisfying - if you play along.

Despite the new playstyle and touch controls, Hitman: Sniper sticks to many classic Hitman conventions and allows you to rack up points for Body Disposals and gimmicky Accident Kills.

You needn't have any exposure to previous Hitman titles to enjoy Sniper, however - all you'll need is a creative mind that enjoys manipulating a scene to its fullest.

Also, you should probably be ok with mowing down legions of virtual baddies from hundreds of feet away and gut-shotting civilians when they're running to narc you out to the nearest guard.

Square Enix told us to expect Hitman: Sniper for iOS "in the fall" and that an Android version will follow not too long after.