Intelligent Systems gives us something new

With guesses ranging from a new Metroid to a Majora’s Mask remake, no one would have predicted a steampunk-inspired, turn-based strategy shooter from the makers of Fire Emblem in which an elite force created by Abraham Lincoln battles aliens in the ruins of Victorian England.

And yet, that's exactly what we're getting with Code Name: S.T.E.A.M - an entirely new intellectual property unveiled by Nintendo at E3.

The end result looks something like Advance Wars mixed with Valkyria Chronicles with a hefty dose of American patriotism thrown in for good measure.

S.T.E.A.M.'s story follows Captain Henry Fleming, who's in jolly old England for the opening of the Steamgate Bridge on the Thames.

Things don't go according to plan, however, as a host of a evil aliens invade and throw things into disarray.

Luckily, the rest of Fleming's S.T.E.A.M. team is in town - and players will command up to a four-member fire time to subjugate the alien onslaught.

It was a bit worrisome to hear director Hitoshi Yamagami mention that S.T.E.A.M.'s inception came from an attempt to make a turn-based strategy game that wouldn't scare off newcomers to the genre.

But despite the new look of the action, Code Name: S.T.E.A.M. is a turn-based strategy title through and through. 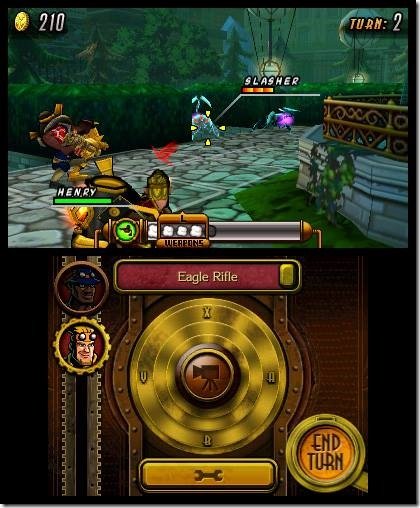 Character movements and actions are limited by their steam (action points), and you can select to forgo your attacks for a turn and set a unit to "overwatch mode" - which allows them to attack as soon as an enemy wanders into their line-of-sight.

Given that Code Name: S.T.E.A.M. is a turn-based strategy title from the makers of Fire Emblem, it made some sense for a journalist in the room to ask if permadeath would be a factor in the new game.

The answer - a quick and terse no - was quickly followed up with the qualifier that this is because Code Name: S.T.E.A.M. is designed to be a team-focused game, and so permanently losing one character would make it difficult to complete.

All of that said, Intelligent System's Creative Director Paul Patraschu said that S.T.E.A.M., "is a hard game. It is a challenging game, but we don't want to feel frustrating."

One example of its challenge comes in the medals you earn from defeating aliens.

Players can use these as consumables in battles to resurrect fallen characters, or they can soldier and use all their medals to purchase more powerful weapons at a quicker pace.

Sounds like a prime area for IAPs? Don't worry.

Patraschu put that speculation firmly to bed when he assured us that, "And no - before you ask - you cannot buy medals on the eShop".

While the imaginative approach to turn-based is impressive, what really makes Code Name S.T.E.A.M. stand out is its retro graphic novel art style.

Art Director Takako Sakai, who worked on the Fire Emblem franchise, described the aliens as being inspired by a mixture of "bugs" and H.P. Lovecraft - while the characters of Captain Henry Fleming and his crew have their roots in classic American pop art.

"What I really love about American comics is the positive nature of the art and the vivid color schemes," Sakai noted when talking about why she chose that style for Code Name S.T.E.A.M.

Despite the 1950's art style, however, S.T.E.A.M. features a refreshingly diverse cast of characters with a blond, white male hero, a female squad member who looks more than a little like Wonder Woman, and an African-American hero named John.

These squad members must work together if they hope to clear levels, and Sakai noted that while you can swap out and upgrade character weapons, there's no "all-powerful" weapon waiting for you at the end of the game.

Similarly, there's no way to grind your way to an "all-powerful" character.

If you want to succeed in Code Name S.T.E.A.M., you need to use your whole squad intelligently to traverse the 3D terrain of the battlefields.

Despite all of this, there's also a good bit of humour in the game as a trailer we saw in the closed-door event showed that one of Fleming's bullets had "E.T. go home!" written on it.

Unfortunately, we don't have a solid release date for in Code Name S.T.E.A.M. yet, but Nintendo said it'll be out sometime in 2015.