With PG First Play video (Updated: Now on Android, too!)

Updated on June 12th, at 6:41: Morning! VVVVVV and Super Gravitron are now available on Android, too.

You can get the puzzling platformer for £1.99 / $2.99 here, and the bonkers score attack arcade game for free, here.

VVVVVV is the brilliant Metroidvania adventure that got a Gold Award on 3DS. Your job in this pixel-art game is to explore a space station and track down your missing astronaut crew.

Your only controls are moving left and right, and flipping gravity so that you bounce between the floor and ceiling. And that's all you need to overcome hundreds of tricky platforming sections.

There are three control schemes in the mobile edition (and you can see me try them out in the video above), but sadly no iOS controller support. 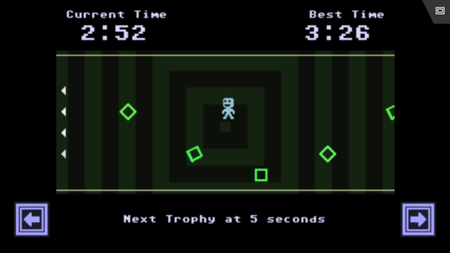 And you thought Super Hexagon was hard

Cavanagh will also release Super Gravitron, a standalone version of a bonkers mini-game in VVVVVV. Here, you automatically flip from top to bottom while you try to weave in and out of obstacles.

"It's serving as sort of a demo for VVVVVV, but mostly I just think it works really well as its own thing on mobile," Cavanagh says.

Both games will hit the App Store at around midnight in your territory. VVVVVV is £1.99 / $2.99, and can be bought here. Super Gravitron is free, and is found here. We'll let you know when they appear in Android-land.

Tough platformer VVVVVV will be bouncing onto iOS, Android, and Ouya this Thursday

VVVVVV, Terry Cavanagh's classic gravity-flipping indie platformer, is about to be submitted for release on iOS and Android