Everyone loves a scoundrel 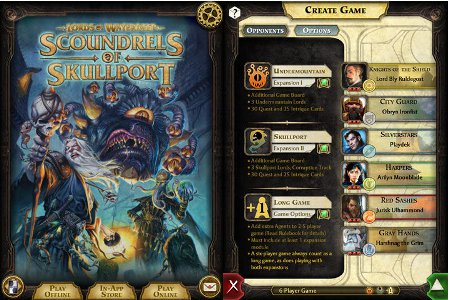 Playdek has released some new DLC for its Gold Award-winning digital boardgame adaptation Lords of Waterdeep.

It's called the Scoundrels of Skullport Expansion and adds a bunch of new stuff to the already pretty stuff-stuffed D&D strategy game.

The expansion adds some new cards, as well as a new resource module called Corruption. This penalises players when the scores are totted up at the end of the game, so you need to balance your greed and that potential harm.

There are also three new lords to play as, an expanded game board, four new quests for each quest type, and the number of players you can have in a single game is bumped up to by 1 to 6.

Scoundrels of Skullport is available right now as an IAP for £1.99 / $2.99. And to celebrate its release the previous chunk of DLC, The Undermountain, is on sale for 69p / 99c.

Want more? Check out our growing collection of Lords of Waterdeep news stories!