LG isn't going to like me for saying it, but the company is often seen as operating in the shadow of its arch rival Samsung. The unveiling of G3 yesterday shows that LG has the means to get one step ahead.

I was at the launch and got a chance to have a play with the Korean variant of the phone, which is on sale now. We'll have to wait until July to get the model destined for the rest of the world.

The killer feature on the G3 by far is the Quad-HD screen (a whopping 1440x2560 pixels on a 5.5-inch screen, which equates to 538 pixels-per-inch), but there's loads of other clever stuff going on too, elevating the G3 to the top of the smartphone tree.

The 13-megapixel camera gains not only more advanced image stabilisation (OIS+) for those nocturnal photos on a night out, but LG has also included a laser-based auto focus system. This locks on to a subject in under 0.3 seconds (faster than you can blink, LG told me) and can work in a much wider range of conditions. 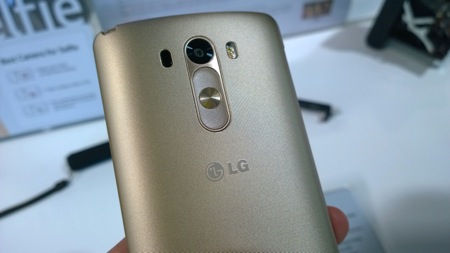 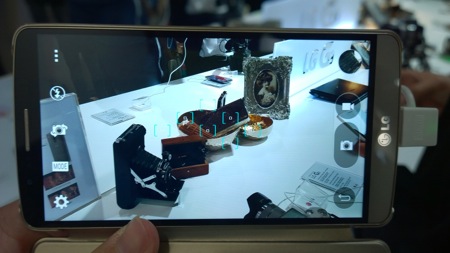 A dual-tone LED flash, plus a front-facing camera enhanced for selfies that can be triggered by clenching your fist, should make it a strong contender in the imaging stakes.

For video, the phone dynamically adjusts the microphone sensitivity to get the best sound to go with the picture. On playback, a 1 watt amplified speaker should ensure your content is always heard, although its positioning on the back is a slightly odd choice.

Taking a leaf out of the iOS 7 book, as well as Google's new simple look for its system apps, LG has simplified its user interface with clean new typefaces and icons.

To me, it made some parts of the phone look a little bland, given the huge potential of the screen, but it's nothing a third-party launcher and some new wallpapers can't fix. 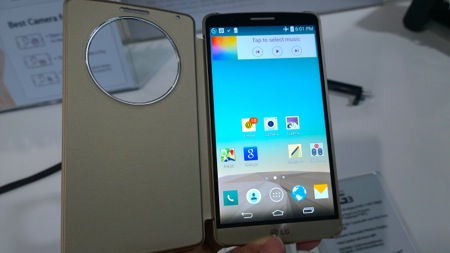 In any case, the screen comes into its own when you start to look at photos or video. Especially video. The naysayers that insist you won't be able to see those extra pixels on such a small screen (I have to admit, before 1080p screens came to smartphones, I believed the same) will soon shut up when seeing how good a 2K video looks.

It's nothing short of breathtaking, and I can't wait to see what games will be like when played on this beast. 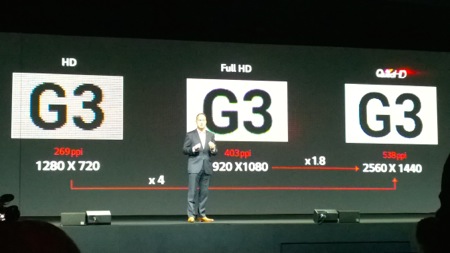 Performance-wise, Qualcomm's Snapdragon 801 is the same chipset as used in the HTC One (M8), Samsung Galaxy S5, and Sony's Xperia Z2. But it's a newer revision, with faster RAM, and should still give the others a run for their money despite having all those extra pixels to drive.

However, while the Koreans get a model with 3GB of RAM, we'll have to make do with just 2GB.

Battery life is another obvious concern, but LG was keen to stress that its new display uses up to 20 percent less energy than others, helped by a range of adaptive systems that adjust the framerate and power for the backlighting, in real time.

A large 3,000mAh battery is also going to help massively, but that's going to need proper testing. With so many more pixels for the GPU to work with, heavy-duty 3D games are bound to place more demand on the phone. 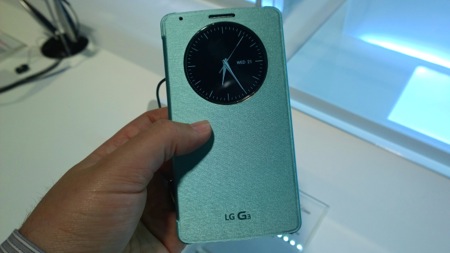 Another new feature is the Smart Keyboard. Although it might not sound like a sexy feature (especially with so many keyboards already available on the Play store), LG did point out that typing is the thing we all do most on our smartphones.

We type every five minutes on average, which perhaps confirms just how addicted we are now to using our phones from morning to night.

The keyboard can be stretched and squashed to suit your personal preference, while LG has also introduced a clever new way to make corrections by sliding left and right on the space bar to move the cursor.

The text you're working with is also moved down to save you flicking your eyes up and down, and you can make loads of adjustments to things like how aggressive you want autocorrect to be, which is mice. Mice. MICE. Nice.

A series of other smart features, such as LG's take on Google Now cards (which will play a big part on LG's forthcoming smartwatch) and a range of security features - like being able to unlock the phone with a series of custom taps around different areas of the screen, or a kill switch for when your phone ends up in enemy hands - are all useful additions.

And even if your phone merely ends up in friendly hands, you can restrict selected content to keep it for your eyes only.

Although it's made of plastic, just like the Galaxy S5, the LG G3 looks like metal and everything is nicely polished. With such a tiny bezel, the phone isn't even noticeably bigger than its rivals.

The curved nature of the back makes it easy to grip, and if you once thought smartphones were getting too big LG has done a fantastic job of not ending up with something more akin to a tablet. 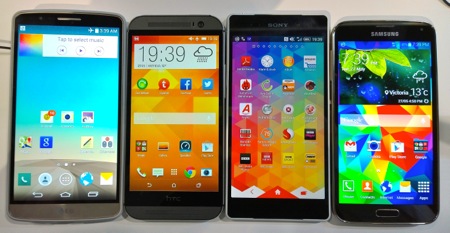 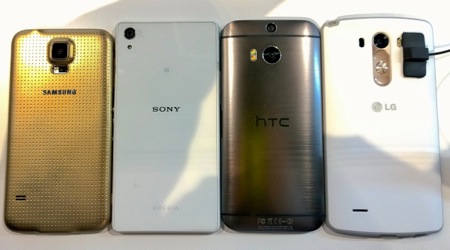 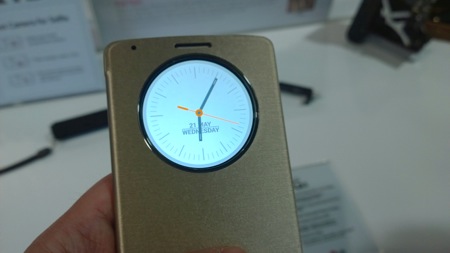 The G3 comes in a range of colours, complemented by the similarly coloured optional Quick Circle case which, as the name suggests, has a circle cut-out to display everything from an old school analogue clock to details of incoming calls and messages, plus icons for accessing six of your favourite applications. Photos can also be taken with a simple touch of the screen. 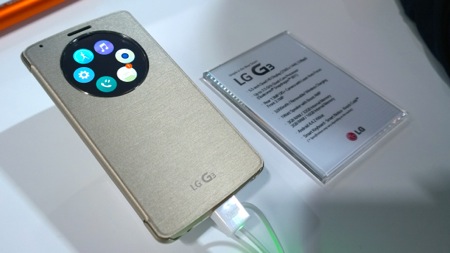 An optional Qi wireless charging stand can be used with the G3 in or out of the case. LG is one of the few manufacturers to see wireless charging as a thing, and it really does make all the difference to be able to put your phone down and charge without wires, or even magnetic connectors. All phones should have this feature as standard. 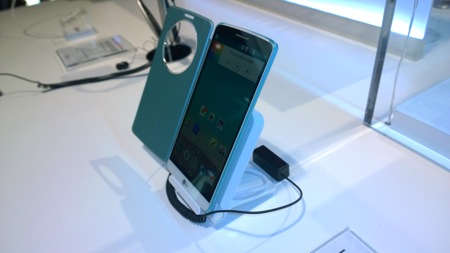 From my time with the G3, I fell in love with the QHD display. However, it's unclear how many games will take full advantage of the extra screen real estate (as opposed to merely scaling up) in the near future, and there's also the Samsung Galaxy S5 Prime on the horizon, which will also come with a QHD display that many assumed was coming to the original Galaxy S5.

With HTC also rumoured to have a 2K version of the HTC One not far away, LG has to make sure the G3 doesn't get delayed and has the marketing might to push this phone hard.

But, of course, you'll be coming back to see our full review in the coming weeks and won't need to be swayed by advertising to know whether this is going to be your next flagship gaming device. 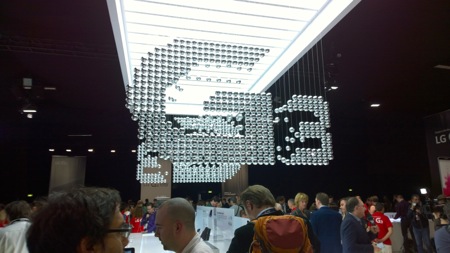 While the Koreans can buy their version from today, with 32GB of internal storage and 3GB of RAM, the worldwide version (16GB and 2GB RAM) will go on sale July 1st, with a SIM-free price estimated to be around £500.