Apple has decided not to sell a sex education game called HappyPlayTime on its App Store. Why? Because it deems it pornographic.

The app / game itself features a talking vulva called Happy that guides the player through a series of six mini-games. These teach the player the anatomy of the vagina and how best to stimulate it.

What should be noted at this point is that HappyPlayTime is entirely illustrated in a friendly cartoon manner. It doesn't contain any photographic nudity and its interactions are abstract. 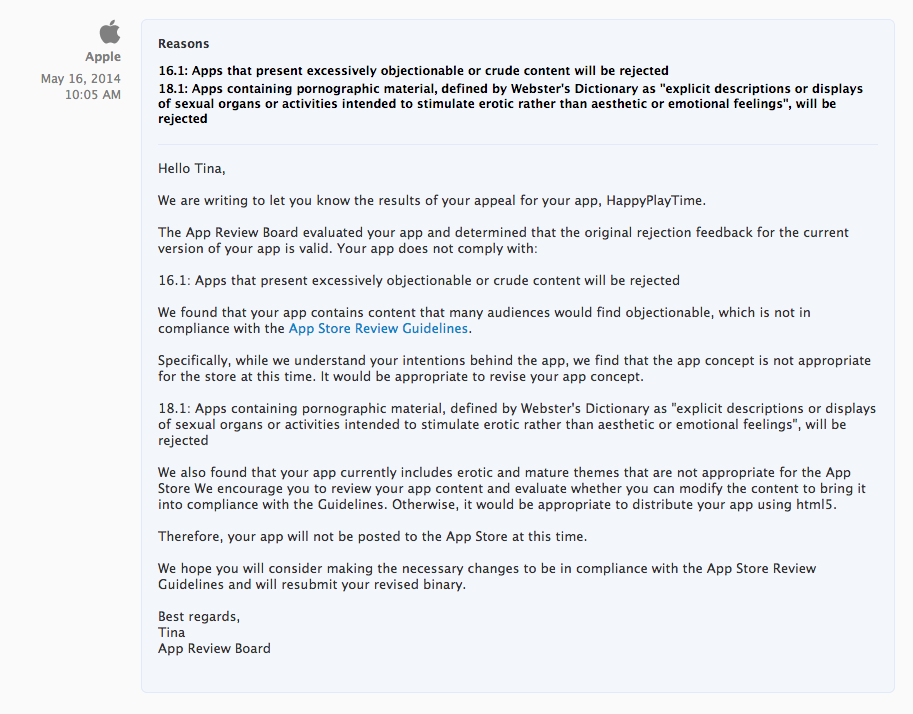 Despite that, Apple rejected it for violating two guidelines. The first is 16.1 for "exceptionally objectionable or crude content".

The second guideline is 18.1, which pertains to "pornographic material". Apple uses the Webster's Dictionary definition of the term to inform its guideline.

Apple's decision here has caused some outcry. People speaking out against it include advertising executive and MakeLoveNotPorn founder Cindy Gallop.

Gallop called out Apple's decision to let Rack Stare onto the App Store (which "lets men stare at tits") but "forbids women educating themselves" in reference to HappyPlayTime.

The creator of HappyPlayTime, Tina Gong, has said that an Android version of the game will surface in the future.

However, with the iOS version a non-starter, Gong says that she'll be focusing on a web version of HappyPlayTime.

You can find more information on HappyPlayTime on its website. Note that the website may be considered not safe for work.