Indie developer Mike Bithell has gone all Steve Jobs and simultaneously announced and released an iPad port for his rectangular platformer Thomas Was Alone.

If you haven't played it yet, this game features a cast of self-aware cubes of artificial intelligence, who have to work together - sometimes begrudgingly - to bypass obstacles and puzzles, and seek out the level's exit.

The whole thing is narrated by comedian - and that annoying British bloke from Assassin's Creed - Danny Wallace, who picked up a BAFTA Performance award for appearing in the game.

We gave the Vita version a solid 6/10 and said the game "is worth experiencing for the story and the narration alone. Those going into it looking for solid gameplay to back the storyline up, though, may find themselves disappointed." 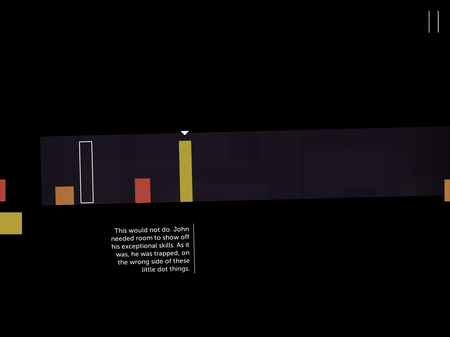 This iPad port was done by Bithell's former co-workers at Surgeon Simulator developer Bossa Studio. We've just reviewed this iPad version, in fact. And given it a rather splendid 8/10.

By the way, this might not be the last port of Thomas Was Alone.

"There are lots and lots of bundles of electronics that it's not working on," Bithell says. "I'm going to keep getting the game out there and if people want it, it's going to be available to them."

Sky: Children of the Light passes 35 million installs and releases its soundtrack digitally