How to build the best deck in Hearthstone: Heroes of Warcraft

When we offered our initial Hearthstone tips and tricks, we glossed over the matter of deck building.

Given the complexity of the subject and the wealth of deck suggestions out there in the wilds of the internet, it seemed a sensible omission.

But with Hearthstone on iOS taking off like a Starving Buzzard, we thought it was a valuable enough topic to be worth re-visiting.

Because once you progress beyond just the Basic cards, you can't just pick decks off the net anymore: you're unlikely to have the required cards in your collection.

With all the possible cards and combinations that you might, or might not have after opening your booster packs there's no way to treat this comprehensively. So instead, let's look at the essential ingredients of an essential deck, and a sample build at the end to see how they all work in practice.

The starting point for any deck should be a collection of cards that work well together. Some of these are obvious: Mage and Rogue decks with lots of direct damage spells and spell damage modifiers like Azure Drake and Kobold Geomancer. Paladin and Shaman decks with group-summoning minions and group buffs like Stormwind Champion.

Just because some card synergies are blatantly self-evident doesn't mean you should disregard it. There are a number of decks built around clear combinations of basic cards that have done pretty well: the Priest "Doctor Draw" approach is a great example, although the current Priest weakness in big class-specific cards lets it down at the highest levels.

What's better, of course, is if you can work out groups of cards that work with each other in different ways so you're not dependent on a single trick. Warriors, for instance, have several cards like Whirlwind and Cruel Taskmaster that can cause damage to both friendly and enemy minions. 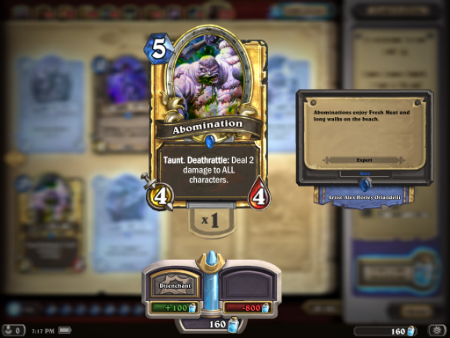 So building a deck with these and a variety of cards that buff when they take damage and Execute gives you the chance to improve your own minions or destroy enemy ones as the situation demands.

Unless you're rolling in cash, or a hopeless Hearthstone addict, you probably won't have a colossal pool of cards to work with. So check what powerful class-specific cards you've collected and have a think about how they might worth with the neutral and basic cards: it's a great starting point to build your killer deck.

Speaking of killers, you also need to make sure that there's something in your deck that's capable of putting in the final blow to the enemy. Impressive combos are all very well, but if they're overly defensive or overly generalised, then you'll be left with nothing to actually kill your opponent.

Not that your killing blow cards have to feed in to your card synergies at all. Some minions, like the Core Hound or the Boulderfist Ogre are quite capable of doing the deed themselves, providing you can keep them alive long enough and ensure the path to the enemy hero is clear of Taunts and other distractions.

If you can pack your deck with absurdly powerful minions or great value buffs and healing cards it's tempting to forget about direct damage, but that's a big mistake.

For starters, it's the only reliable way of clearing annoying cards with effects like Taunt or Enrage that have the potential to cause your minions untold pain if they have to do the removal themselves. Far better to blow your tomentor away with direct damage and leave your summons clear to attack the enemy character directly.

For some classes they're also effective game-finishers. I'm a particular fan of putting Fireball and Reckless Rocketeer in Mage decks, giving you the capacity to suddenly dish out eleven damage at once and killing an unwary opponent.

Which illustrates that direct damage doesn't actually have to be direct damage at all. For classes that lack this effect, minions with Charge are almost as effective, and cards that just punch minions away without doing any damage, like the Rogue's Assassinate, are arguably even more useful.

One of the curious side-effects of Hearthstone's reliable one-up per-turn mana increase is that you always know your mana will be slowly building up as the game progresses.

Combine this observation with the fact that most low-cost minions and spells are, well, a bit crap, and you start to realise that while you'll need variety of different mana cost spells in your deck to make sure you've got spells to cast through the game, you don't really need to pack your selection with low cost spells just to gain an early advantage.

It's generally better to have more of a bell curve to your mana cost: there are lots of very good spells in the three to five cost range and you should focus on these. They're cheap enough to whip out before weenie enemy minions have the chance to cause significant damage, and in the late game you can cast two in a turn for improved combo effects.

Don't entirely neglect cheap cards though. Some, like the Warlock's Voidwalker are very useful in their own right, others, like the Stonetusk Boar, have powers that can be effective in the mid-game or when buffed with other spells.

Another peculiar outcome of the reliably increasing mana supply in Hearthstone is that you're almost guaranteed to run out of cards in the mid to late game. At this point, having more cards in your hand than your opponent does is very likely to win you the game.

Because of this, it's rare to see a deck without some form of extra card-drawing power. Some classes, like the Mage and Rogue have excellent Basic cards to do this. For everyone else there's the Neutral Basic Novice Inventor or its marginally superior Expert Basic cousin the Loot Hoarder.

You'll almost certainly need Taunt. If there's nothing in your Expert card collection or class that can fulfil this role then the Senjin Sheildmasta and Ironfur Grizzly from the Neutral Basic set are your best friends.

Finally if you've got access to minions with Silence, you should consider adding them in. This isn't an effect you'll find in the basic cards. But the Expert Common cards Ironbeak Owl or Spellbreaker probably deserve a slot in most decks once you've got them.

So here's where we put it all together. At the moment, Hunter decks are doing pretty well in the "meta", the discussion and strategy that surrounds Hearthstone as a whole, and I just happen to have been lucky enough to have a couple of very good class-specific common cards, Laughing Hyena and Unleash the Hounds, in my collection. 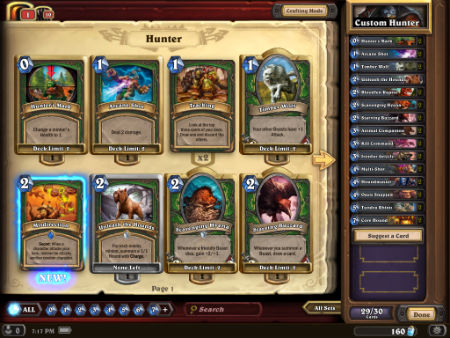 Here's an easy and powerful Hunter deck I put together. Not that I deserve any credit for this: the synergies are pretty obvious and will have been copied by thousands of budding Hunters before me. But it illustrates the process of deck building pretty effectively.

My deck consists of two each of the following cards:

The synergy in this deck is, like most Hunter decks, all about the beasts. All the minions are Beasts and many of them buff other beasts: Tundra Rhino gives itself and all others charge, Scavenging Hyena gets +2/+1 every time a friendly beast dies, Timber Wolf gives other beasts +1 attack and so on.

There's various killer blows in this deck. Unleash the Hounds with Timber Wolf, Core Hound and Tundra Rhino, Kill Command and, well, any beast. Between them they can clear the board and push an opponent down to the point where I can finish him off with my hero power.

There are other sources of direct damage too. Arcane shot, Hunter's Mark and Multi-Shot can, between them, get rid of pretty much anything my opponent puts on the table.

If you want to know whether this deck is any good or not, then get yourself on the servers. I'm playing ranked at the minute: come along and find out whether you can build a better model!

JoyJoy is a gorgeous twin-stick shooter from Radiangames that blasts onto iOS, Android, and Windows Phone 8 on May 15th