There are few hobby boardgames more divisive than 1983's Talisman. Some people dismiss it as a pointless, wholly random time-waster.

Others celebrate it as an endlessly rich and varied story generator. Both are right: now you can find out which camp you fall in to with this Digital Edition.

Talisman is basically a fantasy role-playing game stripped right back to basics and transported from the players' minds onto a board. Participants pick a character with starting stats and a special power and race one another to be the first to kill all the others, usually by reaching the centre of the board and using the dreaded Crown of Command.

It's a pretty simple affair. You roll a die, and move the corresponding number of spaces left or right through whatever region you're in.

Then you follow the instructions on the space where you landed. A few, like the City or the Temple, have special effects, often determined by the roll of a die. But on most you draw one or more adventure cards.

These cards are the backbone of the whole game. Anyone who's seen a physical copy of Talisman will know that the deck you pull from is huge, and playing this mobile version will rapidly demonstrate how varied they are.

There are monsters in different shapes and sizes, mundane and magical items, followers to add to your party, new locations to explore, bizarre visitations from Grumpy Wizards to Demigods and more besides.

The astonishing range and depth of effects and encounters are what gives games of Talisman their shape and narrative: every one is different, a little fantasy novel in its own right.

On the flip side, you'll no doubt have realised that between rolling to move, rolling on some encounter spaces, rolling for combat, and drawing from various large card stacks, there's relatively little room for skill or strategy. Talisman is very much a game that plays you, rather than the other way round. 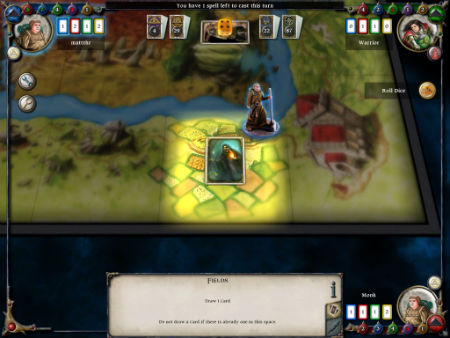 Oi! Monk! Get yer tonsures out!

The biggest problem with actual face-to-face Talisman is that it takes a long time to play: three to four hour games are not uncommon. However engrossing the slowly unfolding tale that the game offers, that's an awfully big chunk of time to spend having your moves dictated to you by cards and dice.

Enter this mobile version, like a knight in shining Cutting down on set-up time and allowing you to save the game whenever you choose should be the saviour of the title, defying naysayers once and for all.

So does it work? Partly.

Yes, you can save the game. Yes, the physical version is reproduced in glorious Retina-sharp detail, fat with fantasy art and rich detail. Yes, all the rules and variety are implemented correctly.

The problem is that while the interface looks glorious, it's just a bit clunky to use, with excessive flicks and taps required to get things done. 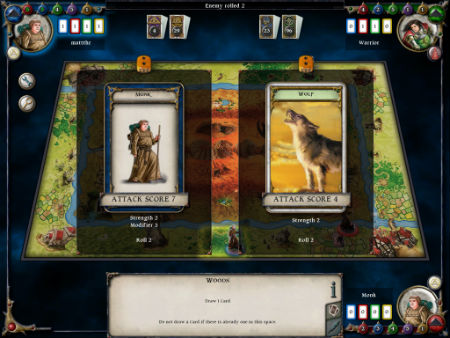 Oh god, Wolves. Why is it always wolves?

In most games that would be a minor issue. It's not really a major issue here. It's just that playing time is so obviously at the root of most of Talisman's problems that speeding it up and simplifying things should have been top of the agenda for a mobile port, and it obviously wasn't.

The best way to make up for this is to play with other people. Player turns in Talisman are mostly discrete: you do everything you need to by yourself, in one go, and pass the dice to the next players.

I know it works well this way because I've done it with other software. So whether you do it remotely and play asynchronously, or pass and play and save the game when you get bored, you can take your game in piecemeal chunks.

Given that there was a sort of pre-release version in the form of Talisman Prologue, its a shame the developer didn't take the opportunity to make a truly definitive digital adaptation of this classic title.

But by the time you're knee-deep in the Fiend Pit, swinging your runesword and handing out gold to your mercenary to watch your back, you probably won't care about a couple of minor shortcomings quite so much.

A gorgeous, if somewhat clumsy, version of a narrative rich but overly random boardgame
By Matt Thrower
| May 6, 2014 |
iOS + Android
Find out more about Talisman: Digital Edition