Modern football is obsessed with money.

Sugar daddy owners pump their ill-gotten funds into hungry clubs. Star players hold out for (even more) obscenely large contracts, as they themselves are bought and sold for the sort of money usually reserved for luxury yachts.

The whole game is swimming in the green stuff, like Scrooge McDuck in his vault.

It's fitting, then, that the main topic of conversation in this new iOS footy management game relates to monetary matters. 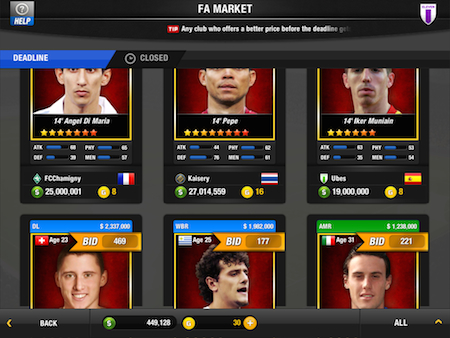 One For Eleven is a Football Manager-style footy management game, but it's been built on freemium foundations. Way beyond a simple way of getting lots of people to give it a try, this affects the very structure of the game itself.

While the game has its own internal currency for purchasing new players, it's geared up to require the expenditure of a premium currency in a number of major areas.

Whether you're setting up a training session, bidding for star players, or boosting your own special managerial skills, you'll need to spend Gold. And Gold doesn't come free.

As the season drags on, you'll find yourself needing to restore your team's stamina through a timely Gold payment. It feels a little odd given that the aim of most management games is to simulate a real job. 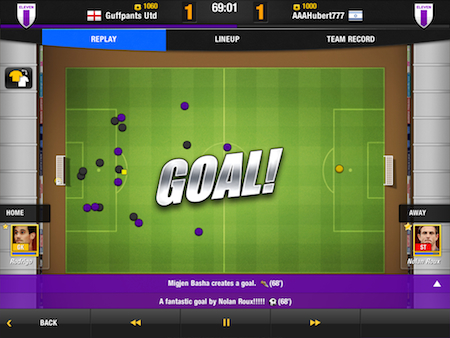 That's not the only way in which the freemium model can be felt. There's a hefty social element here, and it actually works quite well. Matches are against other real players, with each fixture happening at a specific time.

You can tune in an watch a Football Manager-like top-down runthrough of the game as it happens, or catch the highlights afterwards.

Success in matches comes from a number of factors, including the quality of the players you've recruited through the game's Top Trumps-like card ecosystem, how you've set them up (you can tweak both formations and tactical approaches), and good old fashioned luck.

I was gratified to note that a subtle shift in my tactical approach to funnel play through the middle, taking advantage of my two accomplished midfielders and speedy forward, yielded observable results.

Another social element is the transfer market, which involves you bidding for top real life players against rival players. 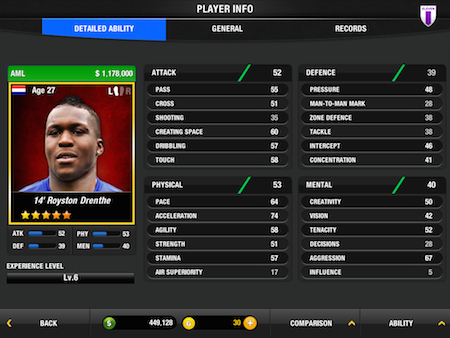 Not shown: his 'Adapting to the Premier League' stat, which is a 3

Of course, there are inherent limitations to this setup. I found myself sitting around twiddling my thumbs on numerous occasions, waiting for a match to be arranged and played.

If you're used to spending hours with Football Manager, clicking through to the next match whenever you have a spare moment, One For Eleven will feel both restrictive and a little anaemic.

Meanwhile, the last time I booted the game up it wouldn't even get past the title screen. The preliminary news screen spoke of extended maintenance time, but it's far from ideal. Also, the patch that was seemingly being applied during all this contained the transfer market function, which wasn't yet available during my time with the game.

All in all, my time spent with One For Eleven was marked by a frustrating staccato rhythm (whether through structural or technical reasons), which as a lapsed Football Manager player I never quite came to terms with.

But One For Eleven isn't really for Football Manager fans. It's for those casual football fans who merely dabble with such games, perhaps understanding the appeal but unwilling to commit to the time and effort required for its mastery.

One For Eleven plays into that whole social Fantasy Football premise of simple selection and recruitment conundrums, with any lack of tactical depth hidden by a compelling social streak.

Whether that description attracts or repels you will go some way to helping you decide whether there's anything here for you.

A bright footy management game that sacrifices a little too much tactical depth and involvement for a spread-out social freemium model
By Jon Mundy
| May 2, 2014 |
iOS + Android
Find out more about One For Eleven