Out at midnight: Third Eye Crime is a stealth game with a psychic twist

Being a burglar would be a lot easier if you had a psychic intuition of where a security guard is looking. Well, that's what Third Eye Crime tells us, anyway.

In this top-down stealth game, you play as clairvoyant criminal Rothko, a thief who can tell where guards intend to go. Rothko can use this special power to slip away with priceless artefacts unnoticed.

You control the thief's movements by just dragging a finger around the screen, similar to the mechanic in Spy Mouse or Flight Control.

Like last week's Hitman GO, this slick noir-themed sneak-'em-up puts a puzzle-like spin on the stealth genre. But Third Eye Crime runs in real time, so you will need to keep on your toes to stay away from the cops and - in later levels - stay alive. 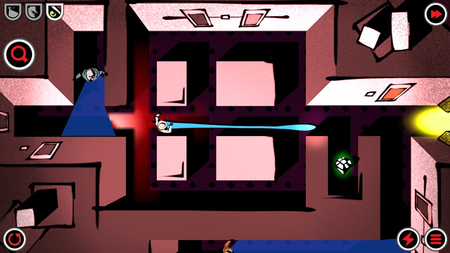 The game comes with three chapters (they're all in act one), and it looks like you can buy more through in-app purchases. You can also buy consumable power-ups to help pass a tricky level.

Third Eye Crime will cost £1.99 / $2.99, and will be out on iPhone and iPad as a Universal app at around midnight tonight.

A full review of the game is on its way, but you can get an early glimpse of it in our PG First Play video above.

Out at midnight: Wayward Souls is a ruthless random adventure from the guys who made Mage Gauntlet

Third Eye Crime, the Bronze Award-winning stealth caper, is free on iPad and iPhone for today