Hands-on with Magic 2015: Duels of the Planeswalkers

To an outsider, Magic: The Gathering is impenetrable. It's a complex collectible card game with fantasy visual stylings about battling the carefully constructed decks of opponents by summoning creatures to do your bidding and then working out, through a combination of mathematics and logic, whether you or your foe is victorious.

The game has been going for years, and, as with many of the geekier hobbies, accessing its community can be tricky when you don't know the rules of the game, let alone the social conventions that govern interactions within that community.

This is where the digital version comes in, and my guide Dan Barrett (the EU Social Media & Community Manager for the franchise) makes it abundantly clear that Magic 2015: Duels of the Planeswalkers is one hundred percent accessible to anyone who is yet to Tap a Land.

He walks me through the early part of the game, and the tutorials that Magic veterans will want to skip but new players will be thankful for.

This digital version is a totally faithful conversion of the physical product, and if you can play Magic 2015, you can pick up an actual card deck at a hobby store and start battling with ease. The reverse is also true. 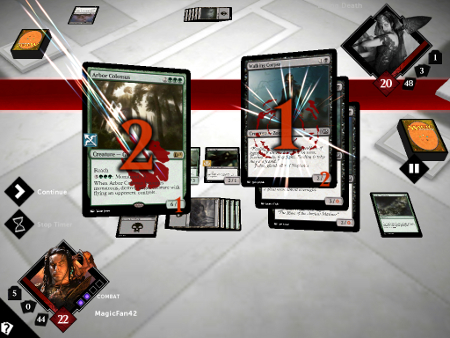 If you've so far avoided playing the biggest trading card game in the world, here's a secret: at its very heart it's not a very complicated game to play.

Each player takes it in turns to pick cards from their hand and place them into the play area. Land cards give you points with which to summon creatures, and creatures are used to attack your opponent and their own creatures. Reduce the opposing player's health to zero, and you win.

Sounds simple, because it is, even when you add spell cards that boost your abilities or hinder your opponent. It's all very regimented, and all very easy to follow.

Where things get spicy is in the special rules that accompany most cards. For example, one creature may be able to sacrifice itself in exchange for a previously defeated creature, or a spell may allow you to attack twice, and so on.

This is where the physical game asks you to consult the rulebook - especially when you're just starting out. But in the digital version, there's always a snippet of additional information to explain exactly how a card's properties will affect the field of play, and it's written in a plain and easy to understand manner.

Duels of the Planeswalkers looks like it should be a great way to learn the game, then, but it's not specifically built as a gateway drug for the paper version. This is aimed at the Magic elite too.

There are 25 levels in the single-player spread out across five different themed planes, with each presenting a different and very specific challenge based on the colour combination of the deck you'll battle there.

How do you handle an opponent that summons large powerful creatures quickly, but can also resurrect any ones you manage to defeat? That's just one question you'll have to answer through the course of the game, and it should make for some head-scratching moments, even for tournament level players.

There are likely more challenges to come after you've finished everything in the main game, as Magic 2014 featured DLC and 2015's version is on course to receive additional content too - such as new boosters - though the Wizards of the Coast representative was quick to highlight that this is a premium release (with an expansive free demo) and 99 percent of the content is unlockable through regular play.

Then there's the much-lauded deck builder, which even I, a person with but a passing interest in Magic, was extremely impressed by. You can construct, and name, and give a box cover to dozens of custom-built decks, based on the hundreds of cards you'll collect throughout the single-player.

Magic 2015 is setting out to make the process of creating and maintaining decks as painstakingly precise or as effortless and quick as you like. You can refine the deck by rarity, mana cost, colour, and so on, and add each card individually to your own very exact specifications.

Or you can add any number of cards to the deck, hit 'auto-complete', and the game will build the very best deck it can out of the cards you own, based on the cards you've included in the deck so far.

This should not only prove fascinating to seasoned players looking to learn more about how cards complement one another, as whole deck strategies can be created around single cards, but it should also help newer players who just want to jump into a game without fear of scuppering their chances by entering a weak deck into play.

Regardless of ability, once you have your deck perfected, you can use it to take on the world (or just your mates) in online multiplayer. Again, a big stumbling block for the physical card game is not having friends close by who can play against you, and this online multiplayer circumvents that issue neatly.

With a neat and smartly laid out UI, oodles of cards, and plenty of help for beginners, this is shaping up to be the deepest, fastest, and most accessible Magic release yet.

With the game launching on Android, iOS, and Kindle Fire (plus PC, Xbox One, and Xbox 360) in summer to coincide with the physical release of the new 2015 Core Set, we'll find out soon enough whether it lives up to its promise.

Out at midnight: Unpossible is a twitchy tube rider with an impressive style for iPad and iPhone

Out at midnight: Yomi is a strategy battler that lets you whomp your foes with powerful cards on iPad

Magic 2015: Duels of the Planeswalkers