The original HTC One was close to being a work of art. With unibody construction, a stunning display that blew away the competition, punchy BoomSound speakers, and very solid performance it was right up there with the best of its contemporaries.

But despite bagging loads of awards, it didn't enjoy the commercial success it deserved. This year, HTC is working hard to make sure history doesn't repeat itself with its new One (M8).

Unfortunately, right from the off the new name might create a bit of confusion. Although fanboys will know the original as the M7, it's a rather confusing name that might even result in some people failing to realise that this is a new phone at all.

The One (M8) - henceforth the M8 - hasn't changed a great deal, the principle differences being an increase in size and a second camera on the rear, which produces some interesting photographic effects for the Instagram generation.

There are some subtle changes, however, like more metal and less (easily stained from grubby fingers) plastic on the rear, improved stereo speakers (as if that were possible), a more powerful amplifier, and on-screen buttons that eradicate the haphazard mix of capacitive buttons and on-screen icons.

It also comes with a larger 5-inch full-HD screen, which is every bit as bright and vivid as the original, but now even better for movies and games.

The addition of a card slot also addresses the issue of having enough room to store your apps, games, and multimedia content. In fact, the card slot is perhaps the game changing feature of the M8.

All things considered, the HTC destroys its rivals on design and attention to detail. But it's not entirely clear whether that's going to be enough.

The M8 has the most powerful Qualcomm chipset currently available - Snapdragon 801 - and it's put to good use in a phone that offers gamers a high-quality display and speakers.

The speakers in particular add an extra dimension to games that would otherwise only be achievable with separate speakers or headphones.

The phone never runs too hot, and there's a range of power-saving options to restrict the performance if you also want to protect battery life elsewhere.

While many manufacturers have been caught out fiddling with benchmarking apps by detecting them and ramping up the power and turning off CPU throttling, HTC has purposely added a high performance mode (found in the hidden developer settings menu) that will run the phone at full power all the time. 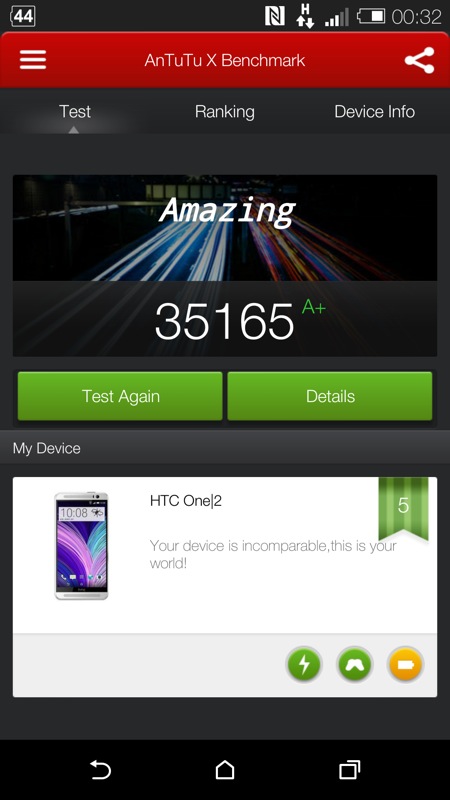 As you might expect, this mode is a quick way to kill the battery, but if you're never far away from a power supply you might enjoy the extra grunt.

The display is highly sensitive - perhaps one of the most responsive I've ever used - which only adds to the M8's gaming credentials.

A lot of what I've found with the M8 camera over the last week or so has been covered in my first impressions, but my perspective has changed a little bit now that I'd some more time to experiment.

The duo camera is a first for a mobile phone, but is there any point? The purpose of the second camera is to capture depth information, which can then be used to apply effects to photos that mimic depth-of-field effects usually achievable only on professional cameras.

Effects, like Bokeh, can be manipulated after the fact on the M8, giving it an edge over DSLRs, but the results are hit and miss and you'll almost certainly tire of the feature very soon. What's more, other phones now offer the same feature with a single camera and often with the same result.

When you do tire of these effects, you'll begin to wish the feature hadn't come at the cost of optical image stabilisation. The only saving grace is that the 4-megapixel sensor has larger pixels to capture light, so the result is a higher shutter speed that generally compensates and results in sharp, well focussed photos.

Focus time is down to just 0.3 seconds, the same as Samsung's Galaxy S5, which means that once you ignore the duo camera and just treat it like any other camera the M8 is really rather good. However, the lack of pixels still means you can't expect great landscape shots, or to do any cropping or zooming afterwards.

After learning that the M8 has a 2,600mAh battery, I was concerned that it would be underpowered.

But HTC has packed in a range of power-saving options, allowing you to modify the CPU speed and other variables at set times of the day, meaning you can bank on the phone not letting you down.

Meanwhile, the extreme power-saving mode can extend the phone's life by many more days, although you'll lose the ability to do just about anything more than you could on an old feature phone from ten years ago.

HTC's Sense UI is becoming increasingly simple and easy to use, with less bloat, and there are clever gestures to activate features even when the phone is in standby, as well as a simple double-tap to wake.

HTC has also produced a Dot View cover that can relay key information in a retro dot matrix fashion, although visibility on a bright day is rather poor.

There's little to dislike about the One (M8) and the only real disappointment lies with the camera.

The lack of pixels could be a problem for some. If you're taking landscape photos you may find that the M8 simply can't capture enough detail. Otherwise the removal of optical image stabilisation makes the second camera even more pointless.

However, I don't see this as a deal-breaker because for pictures of people (such as a particularly active two-year-old boy) the camera performs brilliantly. Sharp, vivid, in-focus photos are easy to obtain, thanks to a combination of the ultra pixels, superfast (0.3 seconds) autofocus, plus a two-tone LED flash for the best colour balance.

For taking photos to share on social media, the M8 will take some beating, while it can also manage full HD video too. What you won't get is 4K video recording, although it's perhaps a little bit too early for people to get excited about that.

That leaves me struggling to find anything else to complain about.

HTC has once again produced an exceptional phone, and one that deserves to succeed, despite being in Samsung's vast shadow.

When pitted against the Galaxy S5 and Sony's forthcoming Xperia Z2, the M8 arguably has the most robust design, exceptional battery life, acoustics that even Sony might struggle to match on the Z2, and a perfectly usable camera - if you can live with its limitations.

HTC's One (M8) is another work of art, with performance to match. The camera isn't a big step up from the original, but it's still perfectly competent. When looking around, try not to forget this exists. Or if you do, it's your loss
By Jonathan Morris
| Apr 15, 2014 |
Mobile

This pathetic hero doesn't stand a chance without you

Hands-on with the One (M8), HTC's new flagship smartphone

HTC's new flagship One phone has a 5-inch display, dual cameras, and a microSD card slot