If any of the following story sounds like absolute gibberish to you, fear not: you're not alone. I don't really understand a word of it, and I had to type it.

NIS America has confirmed the American and European release dates for Hyperdimension Neptunia: Producing Perfection on Vita. It'll be going live in North America on June 3rd and in Europe on June 6th.

That's the easy bit out of the way.

The game is set in the same universe as Hyperdimension Neptunia Re;birth 1, a remake of the PS3 JRPG of a similarly nonsensical name that's also heading to Vita.

In Hyperdimension Neptunia: Producing Perfection, you play a producer who has to train a group of CPUs to be pop idols on the world of Gamindustri. To do so, you have to pick their daily routines, choose what they wear, and teach them various lessons. 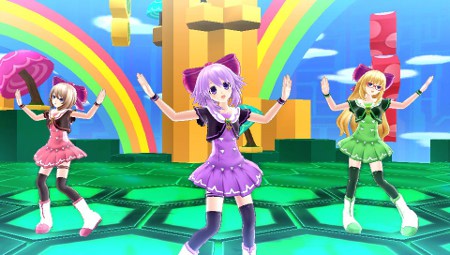 So, it's sort of a pop idol simulation set in the same universe as a cult classic JRPG. I think that's right.

If any of that sounds like something you might want to play (for whatever reason), Hyperdimension Neptunia: Producing Perfection will be available at retail and from PSN in June.

You can look at some screenshots from the game in the gallery at the top of this page. Now that's over and done with, we can all get on with our lives.

Behind-the-scenes look at the karts and track objects of Angry Birds Go!