There was a point when we didn't get any work done at Pocket Gamer because we are all too busy playing Threes!

Suffice it to say, it was a pretty good week.

It's fair to say, then, that we liked this simple, addictive number-sliding puzzle. We gave it a Gold Award, after all. And, no, those things don't grow on secret Gold Award trees we've got planted in our medal garden. Oh, no.

Anyway, Threes! dev Asher Vollmer has written a fascinating blog post in which he goes into detail about the creative process behind the building of the game, shows a huge amount correspondence between the dev team, and talks about the impact of clones. 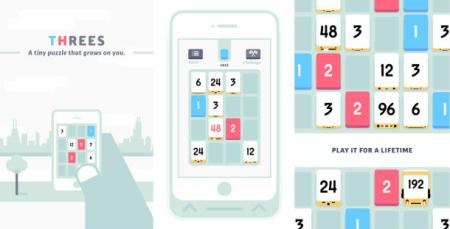 The main game talked about is 2048, a simplified riff on the Threes! template that popped up less than a month after Threes! first appeared on the App Store.

"We do believe imitation is the greatest form of flattery, but ideally the imitation happens after we've had time to descend slowly from the peak - not the moment we plant the flag."

Apparently, comments about how the Threes! team had copied 2048 and how the quickly built game was more impressive than the one Vollmer and his team had taken 14 months to create led to the release of a good deal of information about that formative period.

It's a really interesting read, and one you can peruse at your own leisure by clicking right here. If you've got any interest in game development, then it's definitely worth your time.

The best iPhone and iPad games this week - Clarc, Boom Beach, and Sometimes You Die

Plants vs Zombies 2: It's About Time has been updated with a new world, new plants, and some other stuff