The most addictive thing known to man is not a synthetic compound. Nor is it a natural opiate. Nor is it a vice, like gambling.

It is, in fact, the irresistible lure of another level, another magic weapon, another set of skill points to distribute.

But you're a gamer, of course, so you know this as well as I do.

This fix comes in its purest, most dangerous form as the role-playing game, delivering hits of thrilling adventure and addictive stat increases directly into your frontal cortex. And since RPGs do their nefarious work largely through menus and buttons, they're extremely effective on mobile devices.

Here are ten games you should avoid at all costs if you ever want to do anything else with your life.

The World Ends with You: Solo Remix
By Jupiter Corporation - buy on iPhone and iPad 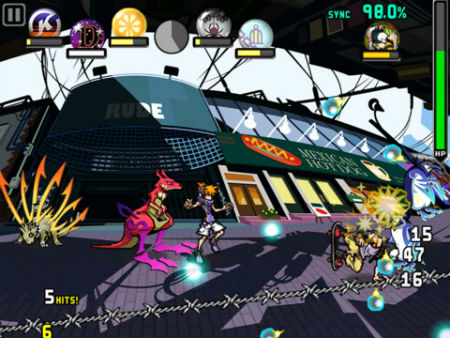 There's no better place to start than with this Japanese RPG, the recipient of near-universal acclaim from critics and players alike.

This is a riotous mixture of genre innovation, thrilling story, and, erm, sartorial elegance. As such, there's something in the 40-odd hours of play time here for everyone to enjoy.

As if 40-odd hours of worthwhile play time isn't enough of a wonder for a mobile game in and of itself. 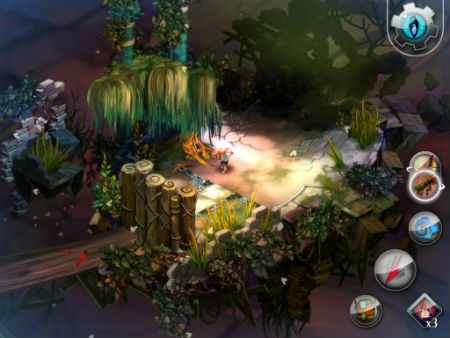 One of the neat things about the core concept of RPGs - that ultra-additive accumulation of experience and loot - is that it can be combined well with other genres.

In the case of Bastion, the 'partner' is action-platform games. Here, then, your diminutive hero wanders around a confusing world that builds itself as you explore, popping windbags with arrows and blades. Yes, really.

And a fine blend it is, too, taxing both body and brain. But the really cool thing about Bastion is the endless voice-over narrating your actions, giving you the creepy sense of a live commentator sitting just behind your sofa.

Star Wars: Knights of the Old Republic
By BioWare - buy on iPhone and iPad 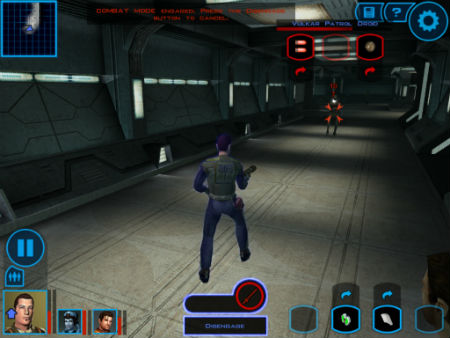 Not all role-playing games are set in fantasy lands, or bizarre alternative versions of Japan. Some are set in the far-flung reaches of space.

Although this being Star Wars, of course, there's still melee combat, monsters, and supernatural powers aplenty.

Fans of the series are well catered for here: from double-bladed lightsabers to a recreation of the Wookie planet of Kashyyyk (as it was originally planned for the movies).

But the real draw is the story with its infamous and brilliant twist, which I won't spoil for the three people who haven't already played this on console or PC. 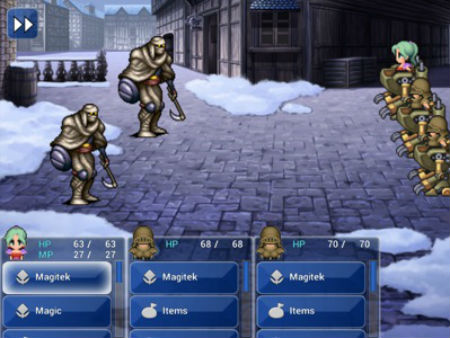 Speaking of classic games from a bygone age, they don't come much more classic than the seminal Final Fantasy series.

Final Fantasy IV offers a rich palette of big, mature emotional depth and epic scope. All the while, though, it retains the cutesy charm and wonder that pervaded '90s Japanese RPGs.

In truth, it's the best of the FF series currently available on iOS. At least until Final Fantasy IX hits the App Store, that is.

100 Rogues
By Dinofarm Games - buy on iPhone and iPad 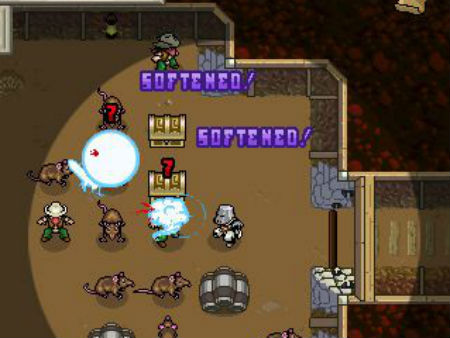 I couldn't compile a list like this in good conscience without including a member of the roguelike subgenre, a personal favourite of mine.

The roguelike's defining characteristics of randomly generated levels and permanent death have been utilised in a wide variety of game genres, but the original - and still the best - users of these genre tropes are makers of role-playing games.

100 Rogues has just about the perfect balance of these elements, resulting in an ever-changing and ever-challenging experience stuffed with loot-gathering, character-levelling RPG goodness. 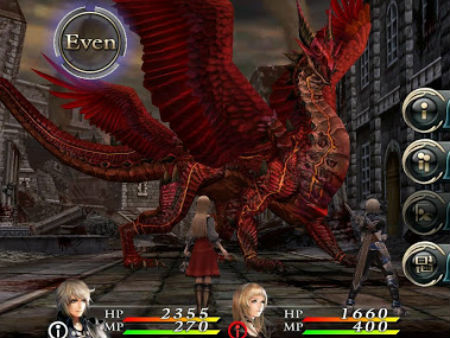 Most of Square Enix's Japanese RPG games on iOS are excellent. Most of them, though, are also console ports you might have played before.

The Chaos Rings series, however, was developed specifically for mobile. And it shows... mainly through the extraordinary level of polish and accessibility.

But that doesn't get in the way of creativity, with the core of the game built around a bizarre yet brilliant Pairs-based battle system full of nuance and depth. Tag team wrestling, this 'aint.

Throw in a story filled with melancholy and pathos, and you're looking at an instant mobile classic. 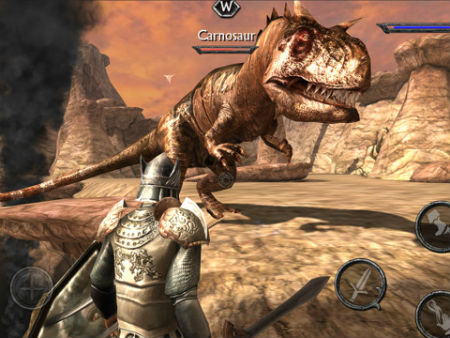 The newest iOS devices can rival modern consoles and PCs when it comes to processing power. But it's not always easy to find games that really exploit that power.

Ravensword: Shadowlands is one that can.

Not in just terms of pretty graphics, by the way, although it's no slouch in that department. I mean in sheer scope, too. Ravensword: Shadowlands is the closest thing you'll find in the App Store to games like those in The Elder Scrolls series.

Combat may be a little weak, sure, but if you want to spend half a lifetime using your mobile as a window onto another world, this is the game for you.

Order & Chaos Online
By Gameloft - buy on iPhone and iPad 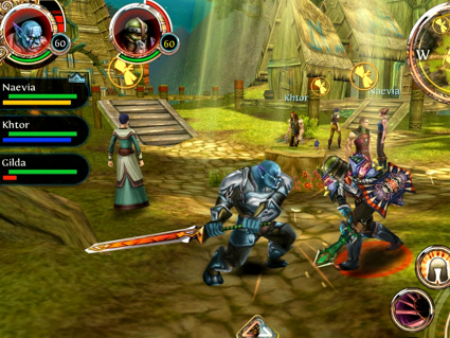 Of course, if you want to live an alternative life in a fantasy realm, you can always take the time-honoured route and do so online.

And here mobile gamers are, again, just as well catered for as their PC-playing counterparts, thanks to titles like Order & Chaos Online.

Indeed, it perhaps tries a little too hard to emulate games like World of Warcraft rather than blazing its own path. But it's still an extraordinary achievement, rich with life and realism (the latter of which is helped enormously by the fact that so many NPCs are fellow humans in disguise). 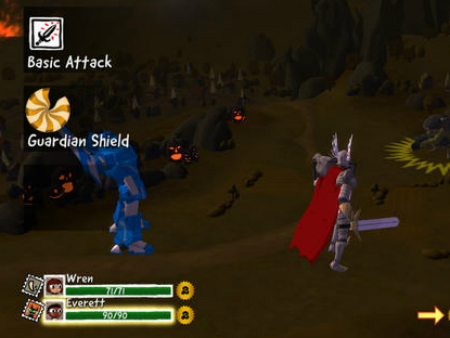 Further proof, if any were needed, of the innate pleasures of looting and levelling no matter the setting is provided by Costume Quest.

In this one, you assume the role of a small child, scouring the neighbourhood on Halloween night for a sibling abducted by aliens.

Given this is a Double Fine game, it's as full of quirky humour as it sounds. Plus, the idea of constructing new Halloween costumes and then donning them and using their powers against the candy-stealing extraterrestrials keeps on pulling you deeper into the game. 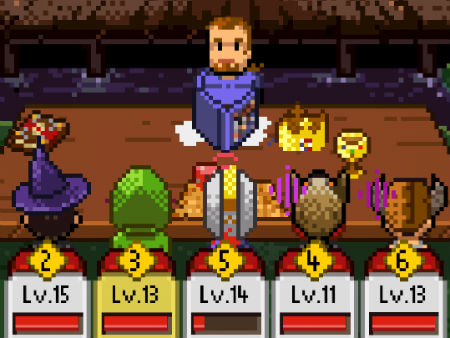 Taking the ultimate step in terms of setting, Knights of Pen and Paper is a gleeful game-within-a-game. So, you step into the shoes of both adventurers and their dungeon master, gathering around the table for game night.

You get to do all the jobs: setting up the quests and encounters and then running through them with the party. It's more fun than it sounds thanks to unpredictable monsters and an overarching plot that is gradually pieced together as you play.

Best of all, though, perhaps, it works exceptionally well on mobile. Though the game is suited to simple controls and bite-sized chunks of play, it still offers interesting mechanical depths.

How many touchdowns do YOU think you can prevent?