Nuclear war shouldn't be fun. And hitting London with an ICBM and seeing that you just annihilated some 85 million people does leave you with a nasty feeling in the pit of your stomach.

But there's a perverse joy here in swapping nukes with North Korea, using this space rock we call earth as a chessboard, and shrugging off billions of casualties as collateral damage.

It's a streamlined mobile-friendly strategy game with a slick Google Earth-style interface where you race to build a stack of weapons, expand your territory, research new weapons, and ultimately wipe out the world's rival superpowers.

Best of all - a quarter of the game's profits will go towards organisations that are reducing the world's nuclear arsenal. That should help you sleep a little easier tonight.

Surgeon Simulator is about as much of a simulation as Angry Birds is a realistic depiction of the animal kingdom. But that's kind of the point of this gross-out comedy.

In a series of operations, you must perform life-saving transplants with (intentionally) clumsy controls, which often leave you accidentally jabbing a saw into your patient's face or dropping a tub of cotton buds into his exposed torso.

It's slapstick, side-splitting fun. But do be warned that the new operations for this iPad version - including eyeball removal and deranged dentistry - might be a bit too gross for the squeamish.

And while I can't disagree with Jon's assessment of Surgeon Simulator as "a little too slapdash and shallow for its own good", if you've got some pals to play with (and can see the funny side of malpractice and accidental laser-induced murder), you'll still get a kick out of it. 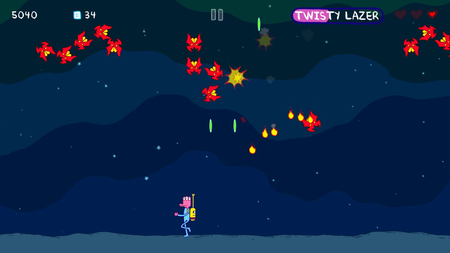 Glorkian Warrior: The Trials of Glork is a collaboration between indie cartoonist James Kochalka and Dino Run creator Pixeljam, which is either very exciting or just a list of names and words you don't recognise.

Don't worry: you don't need to know the people to appreciate this silly mash-up of Galaga-inspired shoot-'em-up and simple platformer. All you need to concern yourself with is shooting down aliens while jumping over critters.

Between levels, you're treated to bonkers Saturday morning cartoon-style interludes with great dialogue. And you can work your way through a collection of upgrades and power-ups.