Playdek updates Ascension: Chronicle of the Godslayer with new cards and a new price structure

Playdek has just updated its Bronze Award-winning digital card game Ascension: Chronicle of the Godslayer with yet another pack of new cards.

It's called "Promo Pack 4", and it's available for purchase right this second.

This new pack contains new heroes - including the Eternal Tormentor - a new void hero, and Spirit of the Ancients (a lifebound hero).

Then, there's the Ascension Temporal Excavator, a new mechana construct, and the Explosive Swarm (a multiplying host of monster madness). 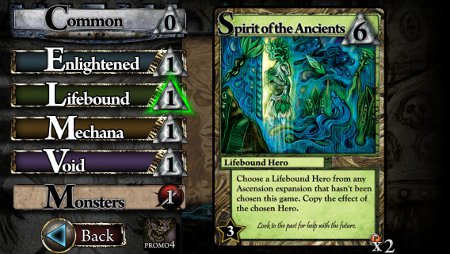 As well as adding some new content to Ascension: Chronicle of the Godslayer, Playdek has had a play around with the pricing structure for the game.

The original Ascension base game now doesn't cost anything, you see. And you can buy a bundle with all the expansion packs, including Promo Pack 4, for £2.99 / $4.99.

If you're already well stocked up with cards, Promo Pack 4 will set you back 69p / 99c on its own. Either way, now looks like a good time to jump into this card-flinging fantasy world.