It won't miss a (heart)beat

'Evolution not revolution' is the hackneyed mantra of the smartphone world, and Samsung's Galaxy S5 is no exception.

At a glance, there isn't a lot to tell the S5 apart from the S4 (bar the slightly larger 5.1-inch full-HD display), but flip the phone over and you'll spot an inevitable new design feature - a removable cover, which which you can swap for a range of colours, including gold (which will prove popular if the success of the gold iPhone 5S is anything to go by). 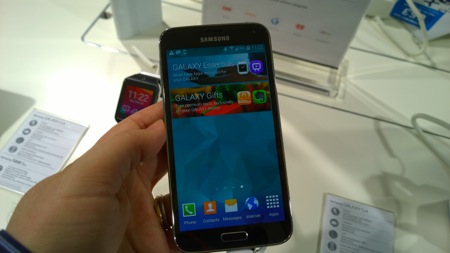 The camera has been bumped up to 16-megapixels, with what Samsung claims is also the fastest autofocus time, plus an enhanced HDR mode that will get the best overall exposure without the risk of blurring.

But a new camera is a relatively small enhancement compared with the addition of a heart rate monitor and fingerprint recognition.

The Galaxy S4 put down a marker with its pedometer, and the S5's heartrate monitor - in conjunction with health and fitness monitoring on the new collection of Gear smartwatches - suggests that the company is going all out for the fitness nuts. 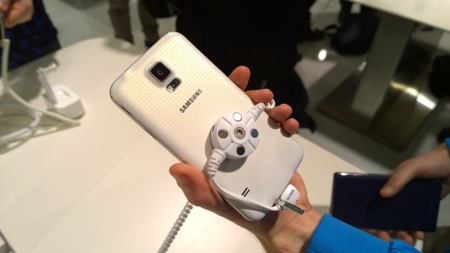 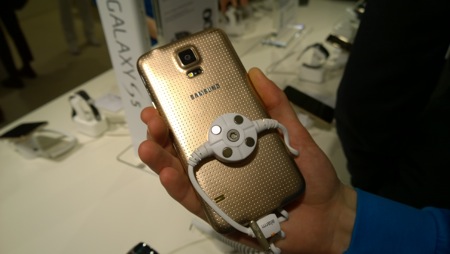 Meanwhile, the fingerprint scanner will allow you to both protect your phone from unauthorised use and block access to things like picture galleries. Kids can also be given access to a limited selection of apps and games, with time controls to stop your little darlings from spending the entire day and night playing.

The Galaxy S5 is also dust-proof and water resistant, although not to the level of Sony's Xperia devices. Samsung claims the phone will withstand water at a depth of a metre for 30 minutes.

As for the phone itself, the Snapdragon 801 powered Android KitKat phone still comes with a degree of user-interface customisation from the TouchWiz UI, but without most of the extra 'S-Apps' that bloated the S4 at a time when Samsung was worried about being left out in the cold by Google.

After its deal to work more closely with Google, it seems that most of those concerns have dissipated and the overall look and feel of the phone is all the better for it.

There's still the usual collection of software features like eye tracking to keep the display active when reading a web page, but Samsung didn't even bother to make a big song and dance about this at its launch event. 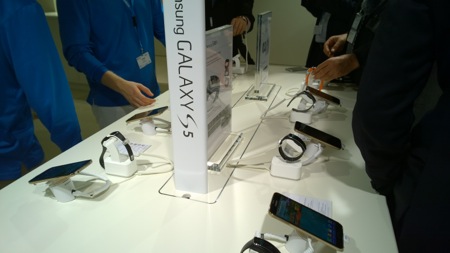 However, it did highlight the phone's ability to go into an ultra power saving mode, when battery life takes precedence over everything else. Switching to a darkened black and white display, and limiting access to apps, GPS and other power-sapping features, the Galaxy S5 can supposedly get at the very minimum an extra 24 hours of life in this state.

Another interesting feature of the S5 is the ability to not just switch between a 3G or 4G data connection and wi-fi, but to use both simultaneously. With both forms of connectivity in use at once, Samsung suggests possible download speeds of over 200 megabits per second, which should make downloading a game blisteringly fast - although that will become rather less relevant if you don't have a particularly generous data plan.

Given the size of some game data these days, I can only hope that Samsung considers releasing the 64GB model, which also comes with a memory card slot and compatibility with SanDisk's recently announced 128GB microSD card. 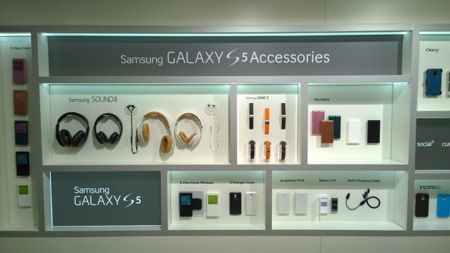 A large complement of accessories from launch (April 11th)

The Galaxy S5 gets its global launch on April 11th, and just about every operator has announced it will be selling the phone, although the exact choice of colours and memory configurations is still to be confirmed.

One thing is for certain: it's bound to be another big seller and is the first of a new range of Galaxy devices planned for 2014, which will include more accessories, new tablets, and the all-new Note 4.

A look at the phone and the new Gear smartwatches, including the Gear 2 Neo and Gear Fit.

This Gods Will Be Watching trailer is (pixellated) torture