By the time we reached the operations tent for the daily briefing, there were only two missions for that day still unassigned.

One was an attack on an airfield north of An Loc, but the brass scratched that. Too political, they claimed. There's a chance civilians might be using the strip.

That left close ground work, i.e. air strikes in support of the 4th infantry who were massing for an attack into Prek Klokk. Grunt work.

Standard air-to-ground munitions were of limited use. We'd be dropping cluster bombs instead. Close and bloody, the sort of mission no one wants to fly but someone has to. To stop the men on the ground walking into a meat grinder.

Recon made it look pretty easy. There were SA-2 high-altitude missiles in place all down the eastern side of the target area, and nothing else around except infantry emplacements and ancient Soviet anti-aircraft autocannons. Peashooters with no range - nothing to worry about.

If we flew in at low altitude, underneath the minimum range of those SA-2s, it should be a cakewalk.

So, with a plan in mind, we kitted up. Kirin and Robin, the most experienced pilots in the wing with itchy reflexes, loaded up with bombs and rockets. We needed to take out those AA guns before they ranged us. No sense in taking the risk.

Jagger and Junior, a.k.a. the dogfighting experts, asked for Sidewinders and Sparrows, air-to-air missiles in case we ran into any bogeys. Then, there's Judge, piloting an old F105 Thunderbird. He's slow but reliable, hits anything. So while everyone took cluster bombs, he took the most. 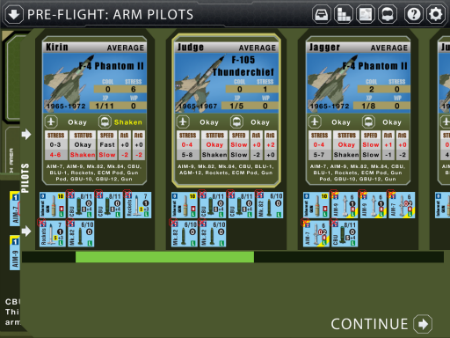 We ran into some flak cannons en route to the target area and were thankful for Judge's expertise at taking them out before they could zero in on us. Still, we've wasted munitions. We knew we'd have to make what we had left count when we were over the target. Nothing left to spare.

As we got closer, the radar starting lighting up. Enemy MiGs in the area for air cover. It's always a tense moment as you approach the target and see what the enemy fighter cover is like.

Sometimes, you've got enough air-to-air missiles. Sometimes, not. You've got to go in and try to complete your mission either way, but it can get hairy, sweaty, too close for comfort.

This time, there were only two bandits: one to the east of the target, one to the south. We had plenty of missiles for those. Should be a case of 'wham, bam, thank you, Charlie' and back to base in time for chow.

Once we were in range of the rockets, Kirin and Robin let fly against those creaky old AA guns. A barrage of four pods ought to have been enough, but the wind was up and the planes were rocking a bit in the slipstream. Whatever damage they did on the ground, they failed to put the batteries out of action. 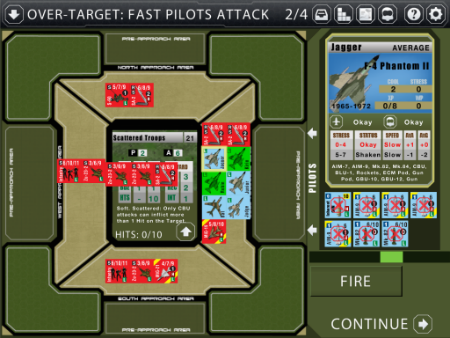 A bad omen. We should have known it then.

We'd made the mistake of tasking our best pilots with ground support, presuming we'd have time to take down enemy aircraft at range. But while everyone was worrying about those flak guns, no one spotted one of the bandits, a MiG-19, emerge flashing out of the cloud like a fat silver raindrop until it was too late. Right on Kirin's tail.

The next thing we know, the sky where Kirin was is full of debris, thick soot hanging in the hot tropical air like joint smoke. As his F-4 Phantom hits the jungle canopy and explodes in a blaze of glory, we see a chute open. He bailed in time, but we're operating on the front lines. Who knows which side he'll land on, what reception he'll get when he hits the ground?

Man down. It sits in your throat like a stale chunk of meat. Man down. You want time to digest the fear. But when you're jetting over the ground at over 2,000 miles an hour, you've only got a second before you're on top of those flak cannons that Kirin failed to take out, and the shells are bursting around your cockpit.

We had bad intel before take-off. There were way more batteries down there than we were expecting - it's like flying through a lead storm. Junior's flying point and he's yellling into his headset that there's no way through. He's going to have to use more bombs to calm the fire and we're already short on munitions for the target. 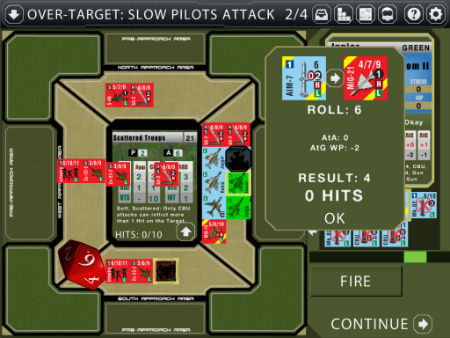 He's too far gone, panicking. Without waiting for confirmation, he unloads hell onto the anti-aircraft batteries. Bombs are easier to target than rockets and this time there's no mistake.

The fire calms, and Judge weaves through the remaining bursts to drop another. Jagger peels off to target a MiG-21 inbound from the east, and for a moment the sky is quiet.

Then, suddenly, there are gaps in the canopy ahead. Small arms fire coming up. We're over the target and desperately lacking in ordnance: every drop has to count.

Robin goes over first, but he's got nothing left to use bar his autocannon. Junior's no use - he's still gabbling away after flying into the flak cloud, clinging on to whatever shreds of nerve he can gather just to keep his plane in the air.

So, it's down to Judge and Jagger with those cluster bombs, custom designed to take out infantry emplacements. Better hope they're up to the job.

They're fast, low, and terrifyingly accurate. The ground erupts in a fire storm, the green jungle turns to ash. It's an inferno, hell on earth for a thankfully brief moment. It's good to be up here, and not down there.

As we turn and bank over again, heading back through the corridor we cleared for the journey home, there's still rifle fire from below. Tiny men are swarming out of their foxholes like angry ants. We didn't do enough.

The infantry are going to hit hell when they assault later on, and that's our fault. We failed. No one feels like talking, tongues too swollen with disappointment and guilt.

Even when we pass Air Rescue choppers outbound, with a Skyraider escort, and hear over the intercom that Kirin got down safely and will be back at base within the hour, there's no real relief.

We didn't kill enough people, so even more people are going to die. It's a vicious logic, but this is a vicious war.

A retelling of one mission playthrough from a campaign in Dan Verssen's excellent Vietnam strategy game Phantom Leader.

The 15 best board games on iPad, to play with the family this Christmas