Genre Moves: How smartphone and tablet gaming has changed the platformer

And how it'll keep changing it

There are few mobile gaming genres as divisive as the humble platformer.

Some rail against the idea of using a virtual touchscreen to guide leaps and dodge. Others celebrate the bite-sized hard-as-nails sub-genre that the smartphone seems to have fostered.

That sub-genre, synonymous with the likes of Kid Tripp and the League of Evil series, owes its existence to the shorter attention span of the mobile gamer.

Kid Tripp, in particular, exemplifies the genre. Levels last less than 30 seconds, and are perfectly pure distillations of the platformer.

You have no control over the movement of the bobble-headed Alex Kidd look-alike. But tapping one side of the screen makes him jump, and tapping on the other makes him throw a rock.

Guiding the titular hero through the thinly sliced levels is much tougher than it looks. Each failure is a lesson, until you mentally unlock the combo of timing and taps required to make it to the end of the challenge.

It's in the details

Not Done Yet Games's game is an exercise in fine detail - each pixel was carefully considered and replaced a number of times before the finished version was released.

"The position of each baddie is a crucial point to navigating the game's levels successfully," Mike Burns from Not Done Yet Games explains.

"And I frequently had to tweak their movement behaviours to either balance the game or introduce a new platforming technique."

But it was the limitations of touchscreen controls that led Burns to create Kid Tripp.

It's a game shaped specifically for the hardware on which it finds itself. It's been chiselled down in bespoke fashion for a touchscreen experience.

"The limitations of touchscreen controls have definitely made the runner genre much more popular. And I love that because that's always been my favourite type of platformer." 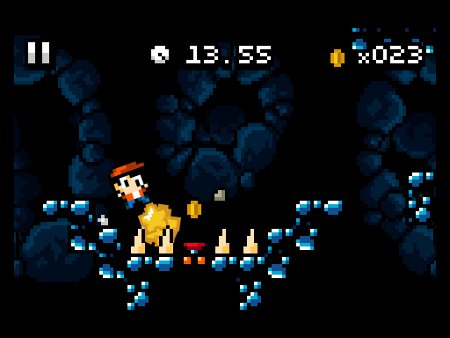 That passion shines through in each of Kid Tripp's blast-beat levels. Interestingly, though, Burns thinks that there's an argument for focusing on meatier experiences, with more console-like progression instead of the short-burst plays for which the App Store is known.

"I do think we'll eventually see fuller, meatier platformers that rival what's on dedicated game consoles, both in presentation and gameplay.

"But we're not going to get there until the clichés of the typical 99c App Store fare (grid presentations of levels, dozens of short, throwaway levels, etc.) are a thing of the past."

Shadow Blade is another smartphone platformer with bite-sized levels. It's a smoother experience than Kid Tripp, though, with the focus on flowing movements and sharp-edged violence.

Compared to Kid Tripp's control method, Shadow Blade's controls are a little more complex - you have to swipe and tap to lead a ninja through and over a series of spikes, platforms, and gaps.

It's a polished and gorgeous-looking experience, but it was, almost inevitably, the controls that gave Shadow Blade developer Dead Mage Studio the biggest headache.

"We wanted to use simple gestures that were limited to taps, tap holds, and swipes. And there was a range of mechanics that were required for the main character in the game," Amir Fassihi from Dead Mage says.

"The controls needed to be intuitive. There are always visibility issues with gesture controls on touch devices, especially when the platformer is fast paced and you need to see everything around you." 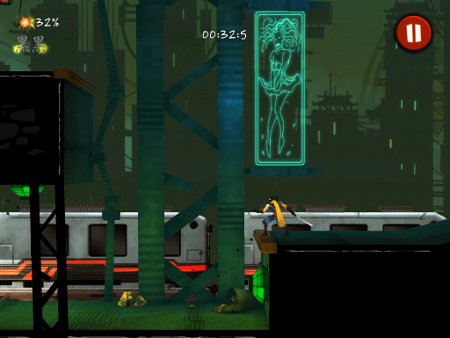 The end result is something pretty special. So special, in fact, that it feels like it has set a new standard for other touchscreen platformers to live up to.

And that's something Fassihi thinks is important for the genre moving forward.

"We need to explore the way every finger can interact with the screen. The standard gamepad is very intuitive for gamers now, but it probably wasn't this way from the start. Special gestures can become natural for gamers in the future."

And while the barrier to entry for smartphone and tablet gaming is that much lower than it is for console gaming, Fassihi doesn't think that this means the platform genre is being dumbed down.

"A wider audience has led to easier games, but reducing the perceived complexity of the game has not resulted in easier games necessarily. The challenge and precise requirements are in the simple controls."

That's a thought echoed by Mike Meade from BeaverTap Games, the developer of Mikey Shorts and Mikey Hooks.

"People can play games on a device they carry with them almost everywhere. More people are playing games than ever before. Many games are designed for 5- to 15-minute bursts. With mobile platformers, I think the focus has been on short replayable levels.

"Simplifying player interaction with a touchscreen is important in engaging more players. Games like Rayman Jungle Run prove that you can still provide a quick-reaction platformer without directional controls." 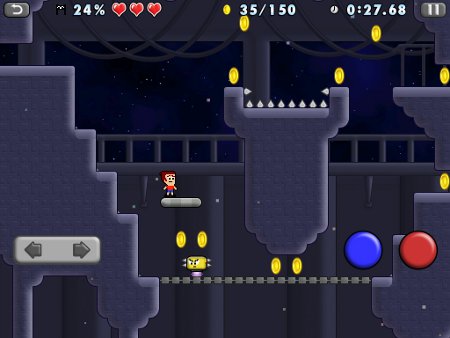 For Meade, getting the controls just right was the most important task for the Mikey developers. It's there, with the taps and twitches, that you hold on to or lose your players.

"I think trying to make a game for a wider audience takes a lot more time and effort. Beginners and advanced players have very different expectations and abilities. Finding the balance between casual and hardcore in the Mikey games was important to us.

"That starts with virtual controls. We spent a lot of time testing to make sure holding the device and tapping on buttons felt as comfortable as it could on a touchscreen."

That leaves just one question: would our developers rather play their platform games on a mobile device, console, or PC?

Which would you pick?

Meade thinks the portability of the smartphone tips the scales in its favour.

"The fact that I can carry around a ridiculous amount of awesome games in my pocket makes a mobile device my platform of choice."

Fassihi is less certain. While he's proud of what the team has achieved with Shadow Blade, he thinks the more established home gaming scene would probably be his choice.

"Console / PC platformers are very mature. And you have a lot of options for good platformers. I believe it'll take a while before the touchscreen platformers can compete, so right now I'd probably still choose console / PC."

And the last word goes to Burns, who might not be ready to convert completely to pocket gaming just yet, but holds out a lot of hope for the future.

"Generally speaking, I would still pick the console platformer. Touchscreen gaming simply hasn't matured to the point that traditional console gaming has. Ask me again in another year or two, though, and my answer might change."

Match the beats and rhythms in musical puzzler Circuits for iPad

The Firing Line: 5 questions for Not Done Yet Games on Kid Tripp