Shatter gems, match-3, and light your opponents on fire in Sorceress of Fortune

The match-3 genre of puzzle games is easily one of the most crowded on the App Store, and it takes a lot for a new entrant to stand out.

Sorceress of Fortune, however, is one game that should have no trouble distinguishing itself from its peers.

...and that's not just because it sounds like a niche magazine for Wiccan women with troubled pasts and nothing left to lose.

In Sorceress of Fortune, you take control of a young mage on a quest for more magical powers. In the course of your adventure, you'll be ambushed by all sorts of monsters that - thankfully - all share the same passion for match-3 puzzling.

Sure you could question why the flaming ghost monster doesn't just light you on fire and be on his way - but you'll forgive Sorceress of Fortune its trespasses when you see the beautiful gameboard it has to offer. 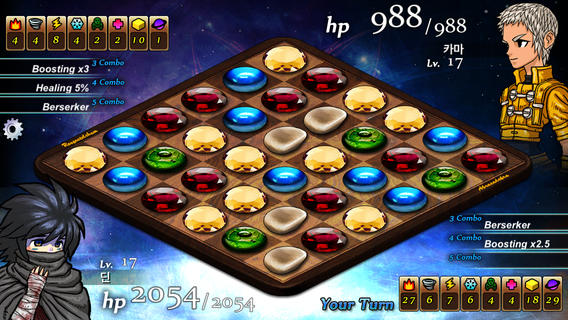 In battles, you and your opponent swap turns moving gems on the same board.

When you match three or more like-coloured gems, you do damage against your opponent. Whoever runs out of HP first, predictably, loses.

You only get to make one move per turn, however, and there's a good amount of strategy in making sure you don't leave any combos on the board for your opponent to fire off at you.

Sorceress of Fortune is a bright little match-3 battler, but it certainly won't be for everyone.

Some might be turned off by the three-quarters down angle of the board, others by the $2.99 / £1.99 pricetag, but it might appeal to those who enjoy match-3 games with plenty of JRPG touches.