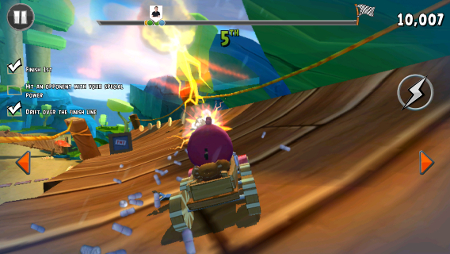 I hate to say this about the old man, but Terence really is a bit useless. His special move is difficult to use, highly specialised, and consequently you'll rarely be able to use it.

Essentially Terence can call upon a very short storm of thunder and lightning, which will damage the carts immediately surrounding him. It's not as powerful as Bomb's blast, but it seems to have a marginally wider area of effect, and it doesn't obscure the screen nearly as much.

It doesn't damage obstacles, and it doesn't collect Fruit or Coins, so its application is mostly limited to Versus and Race Challenges to damage other racers, clearing the road ahead for you to take first place.

You'll want to use it when surrounded by large groups of other racers, or late on the course when you're neck-and-neck with an opponent.

You may want to use it very early in Fruit Splat Challenges too, especially if your vehicle is underpowered in relation to the rest of the grid.

But other than these – pretty standard – uses, Terence's power is very forgettable. I tend to race as him when I'm grinding for Coins to increase my CC, using up his energy on races I'm unlikely to win.

Any questions? Have a few more tips? Pop a comment in the box below. Need a more general guide to playing Angry Birds Go!? Click here.
SEE COMMENTS

Playdek updates Ascension: Chronicle of the Godslayer with new cards and a new price structure

Pick up Badland, Riptide GP 2, and Vector in the Humble Mobile Bundle 4 for any price you like