Line of Defense Tactics might be a tie-in game for an upcoming MMO, sure. It doesn't take long to realise, though, that this mobile RTS is a force to be reckoned with.

3000AD employs a clever touchscreen control system here. You drag lines from your squad of futuristic soldiers to throw them into the heat of battle, snapping them to cover positions to swap fire with insurgent scum.

With a longer press on the screen, you can open up a dial of options.

Instead of running to cover, for example, you might want to sneak there with a stealth move.

Instead of shooting all those people, you might want to stun them and then incapacitate them with a rifle butt to the skull. 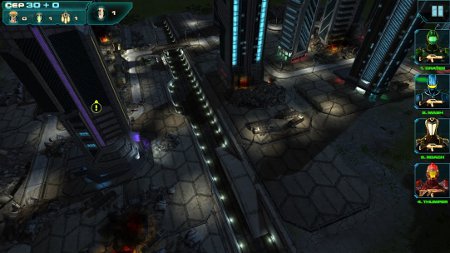 As you play through Line of Defense Tactics, you earn credits that you can spend on new equipment and special gear for your grunts.

You can build turrets, cloak yourself, and purchase all manner of other science fiction-y war things.

There's a decently sized single-player campaign here, as well as a skirmish mode in which you can test out your tactical skills against waves of androids. Because everyone hates androids.

Line of Defense Tactics is out now. You can grab it from the App Store for free [download] and from the Google Play Store for the same low price [download].