Fire Fruit Forge has posted the first screenshot of its upcoming sequel to Bronze Award-winning platformer Spellsword on the Touch Arcade forums, and explained the new direction the studio is taking with this follow-up.

The most obvious thing is a distinct shift in perspective.

Whereas the original was an arrow-straight 2D platformer, you see, this sequel is rendered in 2.5D, enabling you to leap in and out of the screen.

This means Spell Sword 2 has a pudgier look than its predecessor and is less reminiscent of Super Crate Box than the original game was.

The card-collecting focus of the original is present and correct here, though, so you'll still be bimbling around the screen nabbing cards for different powers. 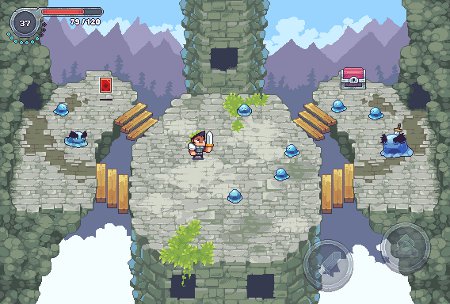 Through the XP system, you will be able to level-up as you slash and roast monsters. Oh, and you'll be able to collect coins to spend on upgrading various aspects of your character, too.

Spell Sword 2 will cost £1.49 / $1.99. Fire Fruit Forge says that it won't turn the game into a freemium title after release, and that there aren't any plans for IAPs.

The game is still pretty early in its development cycle, but we'll keep you posted as and when we hear anything else about it.